Toyota: Tis The Season To Be Social 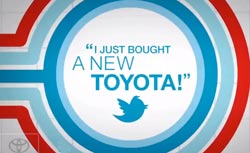 Toyota last year tried something different with its year-end sales campaign. It tried incentives, but not the usual kind. Instead of -- or besides -- trying to lure people into dealerships with deals, it incentivized them to infuse their social media channels with their plan to buy a new Toyota. The Shareathon campaign dangled a $500 prepaid debit card for sharing the message via Twitter, redeemable after purchase.

This year, the campaign, via Saatchi & Saatchi L.A., is a little different. As before, each day the first 140 people who register at www.toyota.com/shareathon, tweet a scripted Shareathon message, then actually purchase or lease a new Toyota vehicle on or before Jan. 3 get the prepaid $500 debit card. But they can also get up to $1,000 in $50 increments based on how often the initial message is re-tweeted within 48 hours. Also, people who participate in the program will be entered to win a new 2011 Prius.

The company says the Shareathon site will also generate "interactive visualizations" that track the original tweets and retweets. The visualizations use circular graphs where each point represents a retweet, with color-coding to distinguish original retweets from second- and third-generation retweets.

Kimberley Gardiner, national digital marketing and social media manager for Toyota, tells Marketing Daily that traffic to the site is robust. “In terms of initial traffic, we have seen a big increase of visitors to the site, tweets, redemption and registration for coupons," she says. The 140 coupons for the prepaid debit cards offered each day have been gone within two or three hours after going live at 8 a.m.

"Last time we had a big success with it; we got 22 million impressions," says Gardiner. "We saw really positive metrics come out of it and dealers really like the idea of adding a social element to something as routine as a sales event." She says the program also takes some of the onus off of dealers to drum traffic: "It's easy to tweet."

Gardiner says Toyota may look at taking that social-incentive platform to other parts of the year, based on the success and momentum from last year. The key, she says, is the short time frame of the sale, ending Jan. 3. It creates a sense of urgency that drives redemptions.

"The intent is targeting people seriously considering a vehicle now, so it's not broad in the sense that we want to reach an audience thinking about buying a car three to six months from now. We want to make sure we are giving them another reason to consider us. We did see that of those who requested coupons, a significant number followed through and bought a vehicle; and many were coming from a younger audience, and many were also new to Toyota."