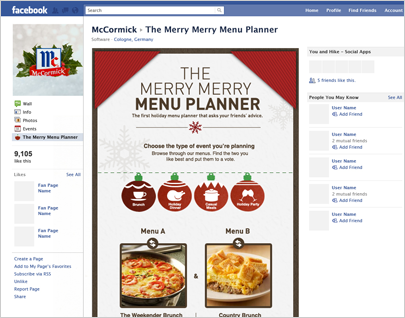 With millions of homes in America immersed in cookie-baking and menu-planning mayhem, McCormick & Co. has engineered two new digital initiatives on Facebook: The Big Cookie Share and the Merry Merry Menu Planner.

Knowing that recipe searches peak early in December, leading customers to stock up flavors like cinnamon, ginger, nutmeg and vanilla, the Sparks, Md.-based spice marketer wanted to inject itself into as many online conversations as possible.

The menu planner app is intended to ward off kvetching relatives, and allows users to select a meal category, such as brunch, cocktail party or dinner, and choose among menu items. The user then posts two theoretical menus to their Facebook page. Friends and family can vote on, let’s say, orange poppy seed muffins at brunch versus a cinnamon crumb cake, or a herbed beef rib roast versus golden clove glazed ham for Christmas dinner.

Users can print the customized recipes to use themselves, but also share via Facebook with friends and family. To publicize the event, McCormick tapped Kim Ima, owner of The Treats Truck, to serve cookies from her bakery-on-wheels in New York City. Ima also created a series of cookie recipes just for the event.

"At a time when laptops and tablets rival spatulas as the most-used kitchen tool,” the company says in its release, “we are offering our fans new ways to share the holiday spirit and create memorable taste experiences -- whether they're putting the holiday menu up for a vote or frosting Facebook cookies for faraway family members."