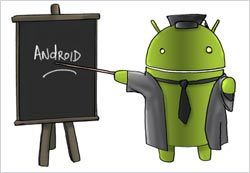 Lessons cover everything from designing better navigation to implementing smoother multimedia streaming and optimizing battery life. In typical Google fashion, the effort is tagged “beta,” and Reto Meier, Android developer relations tech lead, blogs that the company plans to expand the offering considerably in coming months, including sample apps and course design for a broader range of general topics.

It may not be coincidental that Google launches this trainer now.

In recent weeks, research emerged suggesting that despite the Android operating system’s dominant market share, the majority of developers (51%) still plan to write for the Apple iOS platform in the coming year. Only 30% expect to write for Android.

While Android’s smartphone penetration is approaching 50% of the market, that reach has come at a price. The multiple handsets and iterations of the operating system make the platform a difficult target for many developers. In fact, the first lesson in the new Android Training program addresses “Designing for Multiple Screens.”

Noting that Android apps run on several smartphone screens, as well as tablets and the Google TV platform, the tutorial tells developers: “Your application must go beyond merely supporting multiple screens; it must optimize the user experience for each screen configuration.”

As challenging as fragmentation has been to the Android development community, so has the basic issue of revenue. Recently, Piper Jaffray analysts estimated that Apple’s iOS generates about 85% to 90% of the money spent on apps. Since the opening of the App Store, Apple developers have made about $3.4 billion, while Android developers have earned $240 million.

According to the investment bank, iOS has been more successful in getting users to pay directly for an app. Only 1.3% of Android apps are fee-based, while 13.5% of the Apple App Store downloads are paid. On a sheer volume basis, 18.6 billion apps have been downloaded for iOS, compared to 6.7 billion for Android.

At the new Android Training site, however, Google addresses the monetization question in a single lesson, “Advertising without Compromising User Experience.” The tutorial outlines the process for inserting ad banners in an app, using Google’s own ad network AdMob in the example.