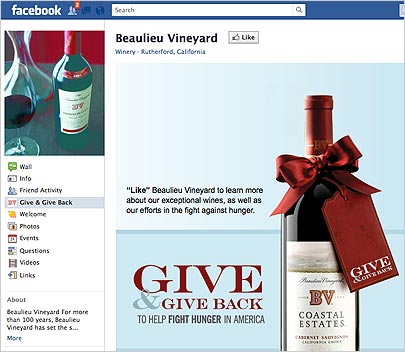 Beaulieu Vineyard is launching a Facebook campaign to encourage wine lovers to donate and volunteer food banks and other hunger relief organizations.

The BV Give & Give Back Campaign, at facebook.com/bvwines, has the potential to provide 2,500,000 meals for American hunger relief. The Napa, Calif.-based winery started a program in the fall with donations to help provide more than 1,000,000 meals to 12 national and regional hunger relief agencies.

“The fact that so many people are not able to put food on that table is a critical issue of our times," said BV Marketing Brand Manager Noelle Campbell, in a release.

More than 50 million people go hungry each day, and 17 million of those are children, she says. “Hunger relief has become a focus of our BV Coastal Estates mission and a way to give back to the community, " Campbell added.

Working with hunger relief experts at Feeding America, a hunger releif charity, and other community advisors, Campbell identified 12 food relief agencies with whom to collaborate.

The company also made a donation to the national efforts of Feeding America.

"The economy is a challenge for everyone right now, we want to remind people that volunteering their time can be as valuable as a donation of money or food," Campbell said.

Beaulieu Vineyard is produced by Diageo Chateau & Estate Wines (DC&E), which is part of Diageo.