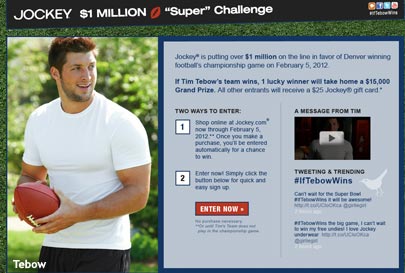 Hoping to hop on the early waves of Super Bowl fever, Jockey is planning to use spokesjock Tim Tebow to get fans pumped up, kicking off a “Super” challenge that will spread $1 million in prizes.

If quarterback Tebow and the Denver Broncos make it to the Super Bowl and win the big game, scheduled for Feb. 5, Jockey will give away $1 million worth of its products to 40,000 fans. And one fan will get $15,000, in honor of Tebow’s #15.

The company is promoting the contest through social media, and fans can follow the quarterback’s weekly performance, as well as receive discounts and special offers on Jockey products, through Facebook and Twitter, at #IfTebowWins.

The Kenosha, Wisc.-based company signed Tebow as a spokesperson back in July 2010, and the company has featured him in a variety of marketing vehicles, including special events, television ads, billboards and print advertisements. “We are big fans of Tim Tebow and wanted to leverage his success and create awareness for younger consumers,” Jockey CMO Dustin Cohn tells Marketing Daily, “and provide free products so consumers can try them.”

Cohn says the considerable controversy Tebow has created in the NFL -- particularly because of his style of praying on bended knee, which has sparked a “Tebowing” trend among professional athletes -- has not had any effect on the marketing relationship. “With any celebrity endorser, you will get varying perspectives from the public. With Tim, we see incredibly high character, a history of philanthropy, a hard worker, a leader -- someone who puts others first, and delivers on promises.”

And of course, there’s a lot of football to play in the weeks ahead, and the Broncos could fold. “Fans will definitely get a consolation prize if that happens,” Cohn says. “While we don’t want to say what it is yet, we will definitely extend an offer to anyone who has signed up for the contest.”