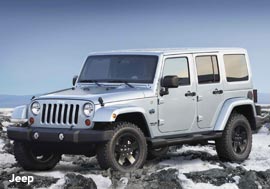 The (amazingly) resurgent Chrysler Group is launching some year-end programs for its Jeep and Chrysler divisions. The Jeep brand is offering a trip to “2012 Winter X Games 16” in a 2012 Jeep Wrangler Arctic edition. The social-media campaign, called “Jeep Arctic Yeti Dig,” has its foci on Jeep's Facebook page, Twitter site, and brand blog.

As part of the campaign, six participants will be picked at random to attend the Winter X Games, where, on Jan. 27, they will compete with each other to dig through a pile of snow to find a “Jeep Yeti.” The first to find the model will win the Jeep Wrangler Arctic. The sweepstakes runs through Jan. 3.

On Facebook, consumers have to “Like” the Jeep brand on Facebook, then visit the sweepstakes page and submit a registration form. All of that gives people a chance to play the virtual Jeep Arctic Yeti Dig game. And doing that gives one entrance to the sweepstakes. Participants can receive up to three entries per day and an opportunity to double their entries by sharing the sweepstakes with their Facebook friends, according to the Auburn Hills, Mich.-based automaker.

The Twitter component involves "following" Jeep, then, when prompted, tweeting back to the brand using the “@Jeep” and #yetidig handles. Participants will receive one sweepstakes entry, per a 24-hour time period, for their tweet during the promotion period.

At the Jeep Blog, people who comment on the post automatically receive one entry into the sweepstakes. Jeep says it will grab two people at random from Facebook, Twitter and the Jeep blog to attend the winter X Games with a guest and dig for the 2012 Jeep Wrangler Arctic edition.

This isn't new territory for Jeep. The automaker has done just this kind of program in the past, where people compete with each other to win a Jeep. Last year, the company held a trivia contest on Twitter, where five finalists came to the New York International Auto Show at the Camp Jeep venue outside Javits Center, leaped into a giant sandbox and dug for a golden Jeep tiki.

The sibling Fiat brand is also doing a year-end program, albeit of the more traditional variety. The “Sign & Drive” lease program for the Fiat 500. The company is offering the Fiat 500 "Pop" version for $199 a month with no money at signing through Ally Financial or US Bank.