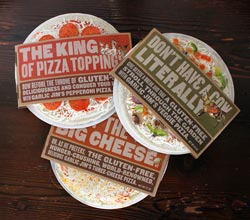 More and more products from mass and specialty brands are looking to tap into the rapidly growing market of consumers who are gluten-intolerant or simply believe that skipping gluten is healthier.

But given the reality that formulating truly tasty gluten-free versions of many foods isn’t so easy, how many products have the confidence to trumpet -- rather than play down -- the gluten-free angle in their marketing?

Garlic Jim’s -- a new, gluten-free retail frozen pizza line from the restaurant chain of the same name -- is doing just that, with unique, humorous packaging that straightforwardly takes on consumers’ largely low expectations for the taste of gluten-free offerings.

To date, the products have been available in Western Washington, with distribution in about 160 regional grocery and health food stores, using the same delivery system Garlic Jim’s uses to truck pizza crusts, ingredients and other food supplies from its Everett facility to its restaurants, according to Chief Marketing Officer Max Clough.

But that won’t be true for long. Based on the pizzas’ success, Garlic Jim’s is negotiating with traditional grocery distributors to service “healthy” national retail chains, Clough reports. Distribution (targeted to regions identified as gluten-free-receptive) will expand into Oregon in early 2012, and thereafter into California and beyond, he says.

In their initial debut at retail, the frozen pizzas -- so far available in veggie, pepperoni and three-cheese varieties -- had very basic packaging largely based on the look of the chain’s pizza boxes. But convinced that packaging would be key in conveying its unique selling propositions to consumers and retailers, Garlic Jim’s hired Seattle-based brand design/experience agency Hornall Anderson to create packaging that could initiate a “conversation” with consumers, says Clough.

“We didn’t want to look like all the other pizza boxes, with their ‘beauty shots’ of perfect pizzas,” or go the typical route of trying to minimize or come off as almost “apologetic” about being gluten-free, he says. “We wanted to convey to consumers who’ve gotten used to wondering what kind of cardboard-like product they’re actually going to have to endure that our pizzas are first and foremost great-tasting -- that gluten-free pizzas can actually be tasty and fun, worthy of celebrating and embracing.”

Hornall Anderson’s solution: Shrink-wrapping the products to let shoppers view most of the real pizza and its ingredients, and using large, rectangular front labels consisting entirely of provocative, large-type copy. (No logo in sight, although a design tweak in the works will include more prominent branding.)

For example, the pepperoni variety’s label announces (in all caps, with some words, including gluten-free, in bolder, heavier fonts):  “The King of Pizza Toppings…Bow before the throne of gluten-free deliciousness and conquer your hunger with Garlic Jim’s Pepperoni Pizza.”  Another variety declares: “Meet the Big Cheese…Or, as he prefers, the gluten-free, hunger-crushing, world-renowned, delicious Garlic Jim’s Three-Cheese Pizza.”

This genuinely disruptive copy approach is a tongue-in-cheek adaptation of the outrageous but indisputably attention-getting headlines of checkout tabloids, explains Hornall Anderson Creative Director David Bates. “To their great credit, Garlic Jim’s was willing to experiment with this very different approach that uses words to engage with consumers on a human level,” he says.

Clough estimates that this packaging -- which debuted about seven months into the launch and was decidedly noticed by consumers and retailers alike -- probably produced an incremental sales lift of 25% to 30%, beyond the new products’ natural growth curve.

“After we introduced the new packaging, some retailers were so excited that they decided to give us special promotional exposure, like featuring the pizzas in their own end-caps,” he says. “As we’d hoped, it’s not just gluten-intolerant people who are buying them. Some grocery retailers have told us that our pizzas are among the top-selling items in their entire frozen-food sections, and some health-food stores report that they’re among the top-selling items in their stores, period.”