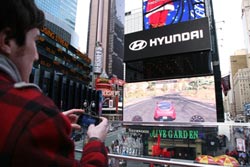 Hyundai Motor has launched what it says is the first racing game on a Times Square billboard that has high-quality graphic resolution, and a realistic driving experience.

The interactive racing game called "Hyundai Racing" appears on the Times Square video billboard it has on long-term lease. The game is linked to the WiFi network Hyundai maintains in Times Square, so people in the Square with accelerometer-enabled smartphones can play. The game is part of the ongoing campaign for the latest Hyundai addition, the Veloster.

You can play the game by tilting your smartphone as if you were turning the steering wheel, but you must first get the controller app, which is a freebie at the App Store.

Once players with the app login to the Hyundai Times Square network they can control a virtual Veloster on the billboard. When players finish the race, their score will appear on the billboard and show their ranking among other players.

Hyundai says the game, which runs on the billboard until the end of the year, is the first of a series of big-screen interactive experiences the automaker plans for its Times Square video board.

“Having a large video display in Times Square certainly creates awareness among consumers through creative graphic elements. But Hyundai’s racing game takes engagement to a new level,” said Steve Shannon, VP marketing, Hyundai Motor America, in a statement. “The game invites the audience to interact with Hyundai in the middle of one of the world’s busiest venues for commerce and tourism."

The automaker has been marketing in Times Square along since Nov. 2009, and says the billboards in the Square bring in some 1.5 million impressions per day. Sales of the Veloster haven't been too shabby either. The automaker, which started selling the 2012 Veloster in September, sold 7,096 of the three-door coupes in the U.S. through November.