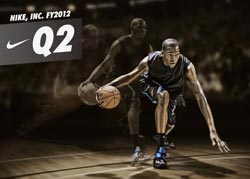 Calling the results “remarkable,” Nike Inc. says its fiscal second-quarter revenues climbed 18% to $5.7 billion, from $4.8 billion in the same period last year. Net income rose 3% to $469 million, compared with $457 million in the year-ago period. Sales in North America were particularly strong, up 21%, with double-digit gains in stores and online on Thanksgiving weekend.

The results beat investor expectations, and Nike executives say the strong performance is a result of steady gains in both its basketball and running divisions, as well as its continued digital transformation. “We’re using digital to change everything about the product creation process,” Mark Parker, president/CEO, says in a conference call that was also webcast. Not only has that sped up its manufacturing, beginning with design and moving into factories, it’s also been a game-changer in its marketing approach.

“Social media is helping us unite and expand,” he says. “We have never been closer to our consumers, as they connect more with each other, their heroes and their favorite teams.”

Reported futures growth, a key measure of the company’s performance, is up double-digits in all regions except for Western Europe, with an increase of just 5%, and Japan, with a decline of 5%. Overall, future orders for the Nike brand are up 13% to $8.9 billion for the coming quarter.

Sales in its basketball division were strong, driven by new launches. “We are all happy to see basketball start up again with five games Christmas day,” Charlie Denson, president, Nike Brand, says in the webcast. He also says that enthusiasm for running is higher than at any time since the 1970s, and that the company is especially bullish about its upcoming NFL contract, with initial products entering stores this spring, and major launches coming up for the fall. “Taking over licensing, there won’t be a big impact until fall, but I am very excited about the launch. This is going to be a new chapter for the NFL and Nike, and the level of performance and innovation are exciting players and retailers.”

Parker also affirmed the company’s commitment to its deep bench of star athletes. “We are deeply connected to athletes. They help us create the products and experiences that come to life, and our brands are a source of authentic emotional connection. Athletes will always be our most important partners, especially in a more challenging economy.”