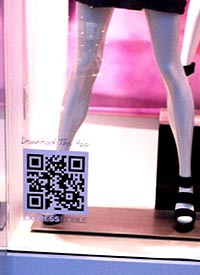 Research this holiday season suggests that more shoppers than ever are relying on their mobile devices for researching and making purchases. So just how widely are retailers trying to tap into that trend by displaying promotional QR codes at store locations? According to new research by Nellymoser, 7.2% -- or about 1 in 14 stores -- are deploying codes this holiday season, with fashion retailers leading the way.

For its study, the mobile marketing company examined more than 700 individual stores in the five largest shopping malls in the greater Boston area this month. Best Buy, J.C. Penney, Macy, Neiman-Marcus, Nordstrom and Sears were among national retail chains included in the review covering a total of 318 store brands.

When it comes to placement, Nellymoser found a majority of the 23 chains using QR codes displayed them in their front store windows to lure shoppers with the prospect of a special deal or discount. Typically, the pixilated squares were applied in the form of a decal in the lower right or left corner of a window.

More surprisingly, some codes also popped up in fitting rooms. Companies such as American Eagle, PacSun, and Madewell “took advantage of the privacy of the fitting room to allow the user time to experience the App before resuming their shopping,” stated the report. Retailers also put codes near registers and in product displays, wall signs and advertising boards.

Fashion and beauty retailers catering to teens and young adults, as well as mobile electronics sellers, were most likely to leverage QR codes in stores. In addition to American Eagle, that includes retailers like BCBG Max Axria, Express, Forever 21, PacSun, Journeys and Gap.

“These retailers like to be seen as being on trend. QR codes are a way to demonstrate being on trend, and an edgy way for the consumer to connect with the store while receiving some benefits,” according to Nellymoser. Fittingly, wireless service providers like Verizon Wireless, AT&T, Sprint and T-Mobile are also sporting codes in their retail outlets.

In almost all cases, QR codes are delivering shoppers to mobile-optimized sites instead of the main corporate site. They usually lead to one of five types of destinations: app downloads, sweepstakes and incentives, social media sites, product information and instructions of some kind.

App downloads often go beyond basic product information to offer loyalty programs, styling advice, check-in incentives or location-based discounts. In terms of tying QR codes to social media, the strategy for most stores involved getting users to check in or share content though Foursquare or Facebook.

Stores such as Sephora used codes to provide video demonstrations and instructions for cosmetics, offering assistance that otherwise might require help from in-store sales staff. Regardless of the approach that retailers took with QR codes, the goal is to use the technology to foster a longer-term connection with consumers.

Since this was the first time Nellymoser conducted a study of QR code use at retail stores, it had no prior data to determine how the 7% adoption rate compared to the 2010 holiday season. However, that rate is higher than the level the company has seen with QR codes in magazines. In the third quarter, it found 2.9% of magazine ad pages had a QR code in the third quarter, and 5.8% in September.

The company also noted none of the retailers covered in its study used a 2D barcode other than a QR code such a Microsoft Tag or a Spyderlink SnapTag.