Hendrick's Gin Takes To The Forest 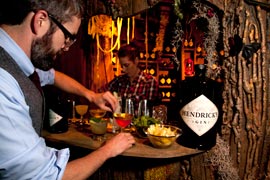 Hendrick’s Gin has been running a grassroots effort that positions the brand as a whimsical, somewhat quirky spirit, whose botanical infusions (and positioning) take it out of the smoky old-boy's clubs that the idea of gin tends to inspire in people and into an "Enchanted Forest of Curiosities."

The latter is the name of a series of events that Hendrick's launched in San Francisco and New York City in December that placed the brand in an environment designed to look like an indoor forest, with an immense fallen tree trunk as a bar, woodland creatures, and various other sylvan delights: Grimm-like like wishing wells, moss, creatures of the woodland, fireflies, performances, and Hendrick’s cocktails and canapés served by sprites.

In San Francisco, the William Grant & Sons-owned spirit, whose theme is "The Most Unusual Gin," did several nights of events in its snow-filled indoor woodland scene with music provided by a 1920s inspired ukulele-led band. The drinks had names like the Archangel, Snow Miser’s Cooler, Alaskan Sour, Post In-Law’s Visit Recovery Punch, and Fifteen “bob” Punch.

The New York event -- in Williamsburg, Brooklyn, of course -- had sword swallowers, bearded ladies, forest creature window performances and a concert by New York downtown favorites the Balkan Brass Band. Hendricks promoted the events and has content about them on its web site and on its Facebook page.

Joanne Birkitt, senior brand manager for Hendrick’s Gin, tells Marketing Daily that the company -- which did the first such event in Manhattan last year, and the two this year in San Francisco and Brooklyn -- will be doing a broader, different program next year. "We're really pleased with how the events this year turned out and while we do not have plans to bring the Enchanted Forest concept to other markets, we will be rolling out an entirely new, delightfully unusual signature event series across multiple markets in 2012."

Birkitt says the company created the "Enchanted Forest" concept last year to create a brand-specific setting around the Arcadian, folkloric, whimsy of Hendrick's Gin's positioning. She says the effort wasn't tied to an ad campaign, but that "We did establish partnerships with several media entities for individual programs and entertainment within the Forest each night." She adds that the Brooklyn event series included a foraged dinner with Edible NY, a storytelling evening with writers from The Onion, and a night of comedy from local drag queen/comedian Hedda Lettuce courtesy of New York Magazine. "In 2012, we will absolutely embark upon a robust marketing plan that will encompass advertising, PR, events and social media," she says.

The company is aiming to appeal not so much to a demographic based on age, per Birkitt, but a fan of premium spirits who is likely to respond to a strong brand personality that diverges from the somewhat tweedy image that gin has. Traditionally, gin is infused with the essence of juniper berries and then with a range of "botanicals," which can be just about anything from anise to orange peel.

Birkitt says Hendrick's botanical mix includes, among other things, cucumber and rose essence. "Many consumers have a notion of gin in their heads as the traditional London dry gin, so when they experience Hendrick's for the first time they are delighted...and in turn end up being incredibly brand loyal."