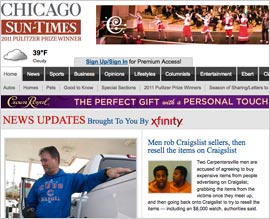 Another sizeable metro daily has been sold. The Chicago Sun-Times and a number of other daily and weekly newspapers serving the Chicago area have been acquired by Wrapports LLC.

The new company was created by Chicago businessman Michael Ferro and media executive Timothy Knight. The deal is worth over $20 million, and should close by the end of the year.

Knight, who formerly served as publisher and CEO of Newsday when it was owned by the Tribune Co., will serve as CEO of the company. He has responsibility for driving its transformation into a digital, multiplatform publisher.

He stated that the company would find "creative ways to deliver a true multimedia experience for our users,” while also “providing more targeted and measurable promotion options for our advertising partners.”

On the circulation revenue front, the company has already implemented paywalls for heavy users of its Web sites.

Buffeted by the same secular decline and economic woes that affect the rest of the newspaper industry, Sun-Times Media Holdings entered Chapter 11 bankruptcy protection in March 2009 and was bought out by a group of investors, including Jeremy Halbreich and James Tyree, for $5 million and the assumption of $20 million in debts.

Halbreich took over the CEO position of the company on Tyree’s death later that year, and has since focused on preparing the company for sale to a long-term owner.

The Sun-Times is just the latest in a series of big metro daily newspapers to be sold as the year draws to a close.

In mid-November, The San Diego Union-Tribune was sold by Platinum Equity to MLIM, LLC, a company owned by San Diego real estate developer Doug Manchester, for an undisclosed sum. Platinum Equity had purchased the newspaper from the Copley Press in May 2009.

Two weeks later, Berkshire Hathaway Inc., the investment company founded by billionaire investor and Omaha native Warren Buffett, acquired the Omaha World-Herald for $200 million, including $150 million in cash and the assumption of $50 million in debt.