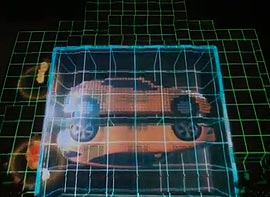 Until very recently, Hyundai had nothing to offer younger new-vehicle shoppers in the way of a protean small car -- that quasi sports car, do-everything machine for Gen Y consumers who were not financially ready just yet to own a Genesis, the automaker's higher-end sports sedan/coupe. Yes, there was the Tiburon coupe, discontinued around four years ago, but that 2x2 configuration coupe was -- to be kind -- "meh" in the flexibility department.

But the new three-door 2012 Hyundai Veloster coupe is intended to deliver on all the above, and the automaker isn't taking chances on positioning. Instead of a more traditional campaign with TV leading off, followed by the usual media flotilla, the automaker has been delivering the Veloster gospel with a digital/social-focused music, video, film, game, and collaborative art strategy. Overseeing the efforts on the agency side is AOR Innocean Worldwide Americas.

Yes, Hyundai has Veloster integrated in Microsoft and Xbox, and Action Sports games, plus a giant billboard digital game in New York’s Times Square that allows people in the area to race Velosters on the billboard using their smartphones. But arguably, the maypole of the Veloster push is social-friendly music and art initiatives, such as the “Re:Generation” Music Project that launched a few weeks ago. The project -- a partnership with the National Academy of Recording Arts and Sciences and its Grammy Awards -- epitomizes Hyundai's approach for the car, involving as it does a set of collaborations between emerging DJs and iconic musicians and performers. It culminates in a feature film to be screened in around 125 theaters next year.

"Music is a very big platform," says Steve Shannon, VP of marketing at Costa Mesa, Calif.-based Hyundai Motor America. He tells Marketing Daily that the project allowts Hyundai to populate social sites like YouTube with trailers, behind-the-scenes footage, music and more. "And we are on TV, but even that is non-traditional. We did 15-second spots, each kind of an appetizer, focusing on specific features: 40 mpg, or the vehicle's three-door configuration. Those ran for six weeks, and in keeping with our target, they were on channels like MTV, Fuse TV and Versus."

The YouTube content about the film, which debuts during the Grammy week, has garnered around five million views, according to Shannon, who adds that earned media from RollingStone.com and other music Web sites has helped drive views and buzz. It also helps that one of the acts featured in the film has garnered several Grammy nominations this year.

Shannon says Veloster is off to a fast start, having sold around 7,100 units since the U.S. launch in September. "Frankly, we are limited by capacity. We can only get so many, and it has the lowest day’s supply of any [Hyundai] model right now," he says. “I have phone calls every Monday from the regional guys. 'White hot' is the term they're using." The Veloster buyers are the youngest in Hyundai's range, around 40 years of age on average, per Shannon. Yes, the car is skewed to Gen Y - 19 -to-23-year-olds -- but that's an ideal, as most young consumers buy pre-owned, get their parents' cars, or are beneficiaries of their parents’ largesse.

Meanwhile, Hyundai has been pressing forward with location-based and social-media-friendly art/media programs. This month, the automaker debuted a pair of building-art video projects created by Pearl Media and conceived by the innovations group of media firm New York-based Initiative. One was at Miami Beach’s Art Basel, the international art festival, and the other was at Santa Monica’s Third Street Promenade.

The Miami installation used a visual and aural aesthetic recalling eight-bit video games of yore, complete with giant Space-Invader-like gaming icons and eight-bit versions of the Veloster dancing across and off the façade of the building. The display was choreographed to an original score composed by Anamanaguchi, part of an electronica genre whose compositions are built on eight-bit chips taken from video games. The Santa Monica projection had a Veloster metamorphosing into a 3D DJ instrument, in sync to rising DJ Porter Robinson’s new song, “Unison.”

Shannon says the success of the exhibitions, which were inspired by a similar exhibition in Europe last year backing the launch of the 2011 Accent, will be gauged in part by their life online.

"It should be, frankly, more impactful online," he says, adding that more and more of the experiential marketing programs, such as "Remix Labs," a series of pop-up music and art studios in various cities around the U.S., should live beyond their physical incarnations. "Many thousands have had a chance to experience them live, but there is so much content you can generate with live events that you can make available to everyone else on hubs like YouTube, which is really the number-two search engine, so it's tailor-made for this."