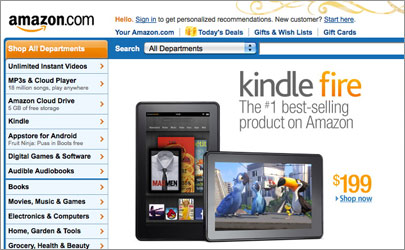 When it comes to online shopping satisfaction and the holidays, shoppers still can’t get enough of Amazon. In the E-Retail Satisfaction Index, perennial favorite Amazon jumped two points to 88, the highest score ever attained by any retailer since ForeSee started its online satisfaction index in 2005.

Meanwhile, Netflix’s PR and pricing blunders hurt it, with its score falling from 85 to 79. (Traditionally, Netflix and Amazon have vied for the No. 1 spot.)

This year’s survey, which tracks all categories of holiday shopping, found consumers were less sensitive to price than in years past, and more likely to respond to merchandise and content. Other top performers include Avon, JC Penney, QVC, and Apple. Sites that score poorly include Overstock and the Gap.

ForeSee says the satisfaction scores are important in that highly satisfied shoppers say they are 64% more likely to consider the company next time they make a similar purchase, and more likely to return to the site, recommend it, and stay true to the brand. It’s also key in multichannel retailing strategies, since satisfied online customers are 48% more likely to purchase from the retailer offline. Its analysis has shown that on average, a one-point change in Web site satisfaction predicts a 14% change in Web revenues.

ForeSee, based in Ann Arbor, Mich., uses the academic methodology of the American Customer Satisfaction Index (ACSI) created at the University of Michigan to determine the scores. The survey is based on some 8,500 responses, collected between Thanksgiving and Christmas.

Meanwhile, Santa’s coming -- and going -- did little to slow shopper passion for Internet shopping this season. IBM Benchmark says that online shopping on Dec. 25 and 26 was just as strong as in the weeks leading up to the big day, gaining 16.4% from the prior year on Christmas Day, and 27.8% on Boxing Day. And mobile traffic was healthy as well, with 18.3% of all online sessions on a retailer’s site initiated by a mobile device, up from 8.4% last year. Apple’s iPad led all mobile device traffic, followed by iPhone and Android.