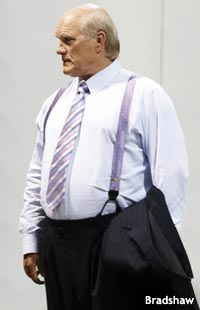 January is always showtime for marketers selling weight loss products and services -- but this year, it looks like they are taking a closer look at men.

Nutrisystem recently named NFL great Terry Bradshaw as its “marquee spokesperson” in launching its new Men’s Success program, which it describes as its “most comprehensive weight-loss program to date and its most substantial reformulation in years.” And Weight Watchers is blanketing the airwaves with its new spokesjock, the NBA’s irrepressible Charles Barkley.

The shift toward men, experts say, is due to slower growth in the industry overall. John LaRosa, research director for Marketdata Enterprises, tells Marketing Daily Americans spent an estimated $62 billion in 2011, up just 2% from the prior year and well under its historical 6% annual gain.

That certainly isn’t because Americans are any slimmer, or less worried about their weight: In fact, Marketdata says the typical American dieter now makes four weight-loss attempts per year -- the highest number in 15 years. Instead, he says, it’s due to the recession and the increase in do-it-yourself dieting, which he estimates to be about 80% of all dieters, up from 70% before the recession.

So it makes sense that companies hope to grab the love handles of any new demographic. LaRosa estimates that men’s weight-loss efforts account for roughly 15% of the market, or $9.3 billion. Nutrisystem, which also uses quarterback Dan Marino as a spokesperson, “has a higher share of male clients than most diet companies -- about 25%. For Weight Watchers, Jenny and other commercial programs, the men's share is between 10% and 15%.” And meal replacement company Slim-Fast has also scored well with men, he says, selling about 25 to 30% of its shakes and powders to guys.

But it’s a tough sale, he says. “Men tend to try to lose weight on their own, by working out at a health club and using a do-it-yourself program,” he says, “and they are also more likely to use a medical program supervised by a doctor. They shy away from group meetings where you have two men and 30 women in the room.”

Testimonial ads featuring Bradshaw, who has lost 32 pounds on Nutrisystem, began airing this week. And Weight Watchers’ “Lose Like a Man” program broke Christmas Day, featuring 27 pounds less of Barkley, and is running in print, broadcast, and online.