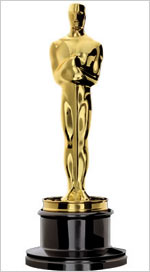 The movie business hopes to become more celebratory for this year's Oscar broadcast. Industry statistics show the business could use it.

A new one-sheet for the Academy of Motion Pictures Arts & Sciences features the Oscar statuette with the tagline "Life. Camera. Action. Celebrate the movies in all of us."

While surprising some business analysts in previous years with big U.S. box office revenue, 2011 looks to finish with more sobering business points. U.S. box-office revenue is currently around $9.8 billion, according to reports. At this rate it will be down a couple of percentage points from the $10.58 billion of 2010, and from $10.59 million in 2009.

Worse numbers come from actual attendance -- now at around 1.23 billion box office tickets for U.S. and Canada theaters. This number would be the lowest since 1992, when there were 1.17 billion tickets sold. The current 2011 results would be down from 106 million a year ago, 279 million from 2009 and 108 million from 2008, according to The Wrap.

Demographics trends aren't looking good either. The business' long-time dependence on young moviegoers appears to be changing, with less of those movie customers buying tickets and older moviegoers on the rise.