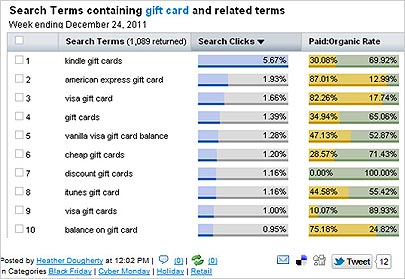 One driver of post-holiday traffic remains shoppers seeking out sales and discounts after the holidays -- especially after Christmas, Hanukkah or other religious holidays at the end of the year, where gift giving could mean receiving a gift card to make the purchase. Experian Hitwise Analyst Heather Dougherty believes if search is an indicator of the uptick, there were plenty of gift card givers, along with recipients looking for goods and services to spend them on. Gift cards could lead to searches and clicks on paid-search ads online.

Search queries with variations of the keywords "gift card" rose the week before Thanksgiving and continued to grow each following week. During the week of Dec. 18, the share of search clicks linked to the two-word phrase rose 32% compared with the year-ago week in 2010.

After totals are tallied, the National Retail Federation (NRF) estimates that consumers will have spent $27.8 billion on gift cards. Dougherty points to the NRF’s 2011 Holiday Consumer Intentions and Actions survey, which highlights that holiday shoppers will have spent an average of $155.43 on gift cards -- the highest amount since 2007, and up from $145.61 last year.

Dougherty wrote that last week's top search query, "kindle," turned up as the latest word to accompany the phrase "gift card." But gift cards aren't the only term generating searches after the holidays.

So what's the top New Year's resolution that search marketers should make? Don't stop running paid-search ads after the holidays, because it could become the most profitable week for online and offline sales as more paid-search ads drive consumers to conversions, according to Josh Neuman, director of customer acquisitions at Zazzle. He said there are specific product segments that do much better than others during the week between Christmas and New Year's -- or just after New Year's, as people prepare to take on resolutions.

"While people give iPhones and iPods as holiday gifts, those who receive want the covers, chargers and other accessories they didn't get," Neuman said.

Concentrate paid-search campaigns on items that can offset slow sales. Big companies, such as IBM and Intel, make acquisitions or enter product markets to offset down quarters. Google, which made more than 50 acquisitions this year, has begun a similar strategy as it continues to gobble up companies, mainly because one business unit or product line can sustain growth during all four quarters.

Companies can help consumers keep the resolutions they make for the New Year, or fill the orders of accessories to go with the smartphone or tablet.

Similar to the idea that people need to continue an exercise regimen to prevent muscles from deteriorating or breaking down, marketers should continue paid-search campaigns during the holidays, tweaking messages. Look also for intent and how syndication might support times when online and offline sales might lag.

Happy New Year. Relax, enjoy, and have a safe holiday weekend. Hey, some of us who live with the sand and beach just want to get back to the other side of nature sometimes where we find trees and streams.