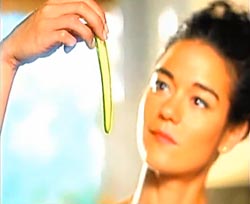 In a year that was defined by consumer caution amid a general atmosphere of economic malaise, it's probably not surprising that a TV ad for a food processor has won Ad of the Year honors for creative effectiveness. Consumers were feeling squeezed from many directions -- and one way to cut expenses is to get more creative in the kitchen and dine at home more.

According to TV ad tracker Ace Metrix, it was a KitchenAid food-processor ad, touting culinary ease, that made the biggest impression on consumers in 2011, scoring a 699 out of a possible 950 points on the Ace Metrix scale.

By comparison, a year ago viewers were smitten with the razzle-dazzle of 3D television technology, catapulting an ad for 3D set maker Samsung into the top spot, with a score of 736. That spot was likely aided by the positive buzz from the blockbuster 3D hit film "Avatar," as well as a raucous marketing battle among several 3D set manufacturers.

But technology made an impression this year as well -- the second-ranked spot on Ace’s list for 2011 featured Microsoft’s Kinetic voice and movement recognition process, which scored a 683. Finishing fifth overall was an ad for Amazon’s Kindle, which garnered a 671 on the Ace scale.

Taking third place was an ad for Coca-Cola (682), and just behind that one in fourth place was a spot for quick-service restaurant chain Olive Garden (674).

“To be a top ad, you need to deliver more than just ‘likeability,’ which is just one of the many criteria that go into an Ace Score,” stated Peter Daboll, CEO of Ace Metrix. "The highly effective ads on this list need to score well with consumers on multiple dimensions, such as relevance and information.”

Launched in mid-2009, Ace Metrix analyzes the creative effectiveness of debuting TV commercials. It utilizes proprietary software to provide near-real-time reports on spots across all major brand categories, such as automotive, consumer electronics, beverages, etc., based on the impressions of a nationally representative sample of 500 consumers.

The system evaluates variables such as persuasiveness and likeability across an array of demographic and geographic targets. It also asks panelists to provide their personal impressions of spots.

In addition to the overall list, Ace revealed the top ads by category, brand, air date and for the fourth quarter. The complete breakout is posted on the firm’s site www.acemetrix.com.