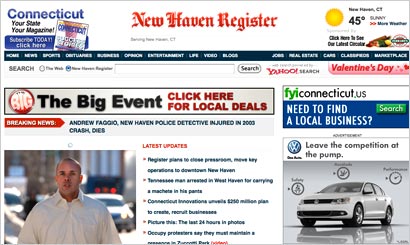 The New Haven Register is laying off 105 workers involved in the printing and distribution of the newspaper's advertising inserts -- functions that will be outsourced to The Hartford Courant, according to the latter. The Hartford Courant will also take over responsibility for printing the New Haven Register's sister publications, The Register Citizen and Middletown Press, also owned by the Journal Register Co.

The cuts will take effect in March.

The New Haven Register announced the planned layoffs in a letter to the Connecticut Department of Labor. It is also selling its office and production facility, located on a 13-acre parcel in New Haven. Register Publisher Tom Wiley stated that the newspaper would open a new newsroom in downtown New Haven, giving reporters more immediate access to the community.

The Journal Register Co. has been buffeted by the same secular decline affecting the rest of the newspaper industry.

After the ill-fated acquisition of community newspapers serving the Detroit metro area in 2004, the company was forced to file for chapter 11 bankruptcy protection in February 2009, and was then acquired by Alden Global Capital in July 2011.

Overall, the newspaper industry has seen total employment slip from 414,000 in 2001 to 258,950 in May 2010, according to the latest figures available from the U.S. Department of Labor. The current figure is almost certainly even lower.

Separately,  up to 200 employees may be laid off as part of Halifax Media’s acquisition of The New York Times Regional Media Group, according to an SEC filing, which specified some of the terms of the deal. In negotiating the sale of the Regional Media Group, tThe New York Times Co. stipulated that Halifax be allowed to lay off no more than 10% of the group’s workforce. It’s not clear whether Halifax will lay off the full complement allowed under the deal.