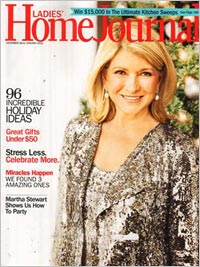 One of the country’s largest and oldest women’s magazines is taking a new approach to editorial content -- turning to readers for stories. Although some smaller magazines have based their editorial models on user contributions in the past, the move by Ladies’ Home Journal marks the first time a magazine of this size has done it on such a large scale.

LHJ editors plan to draw material from the magazine’s Web site and Facebook page as well as another Meredith Corp. property, DivineCaroline.com, among other sources, reports Ad Age. What’s more, this will not be a timid trial run: The majority of the mag's content is supposed to come from readers beginning with its March issue.

(The user-generated content will still be fact-checked, and there will still be features penned by experts). The amateur contributors will be paid at standard professional rates for their work.

Concurrent with the shift to user-generated content, LHJ is also getting a new look, with a redesign by Pentagram that resizes elements in the magazine’s logo (de-emphasizing “Home” and blowing up “Journal”).

As noted, some smaller titles have experimented with this model. 8020 Media, founded in 2007, publishes JPG magazine, about photography, relying on user-generated content and selling print copies of the quarterly publication on demand; another magazine about travel published by 8020 Media, Everywhere, was forced to close in August 2008.

Food Network Magazine is raising its rate base again, reflecting strong continued growth at the title. The magazine, which is published by Hearst in partnership with the Food Network, is raising its circulation guarantee from 1.4 million to 1.45 million, effective with its July/August issue. This is the seventh rate base increase for Food Network Magazine since it launched in 2009. The most recent (sixth) rate base increase took effect with the January/February issue, on newsstands now.

Food & Wine is hoping to pluck at epicurean heartstrings and wallets with the launch of a new charitable program bringing together 10 superstar chefs, called “Chefs Make Change.” CMC hopes to raise $1 million for charities founded or chosen by the chefs, including José Andrés, World Central Kitchen; Dan Barber, Stone Barns Center for Food and Agriculture; Mario Batali, Mario Batali Foundation; Rick Bayless, The Frontera Farmer Foundation; and Cat Cora, Chefs for Humanity Reduce. The February issue, on newsstands January 13, will include interviews with the chefs about their charities along with healthy and affordable recipes inspired by each chef’s cause.

House Beautiful is introducing a new “integrated advertising experience” in partnership with longtime advertiser Glidden Paint in its February issue, as well as on the magazine’s Web site. Throughout the magazine, select editorial features are imprinted with invisible digital watermarking technology created using the Digimarc Discover. Readers that scan the watermarked content with a mobile device are taken to interactive video at housebeautiful.com, where Glidden splash pages promote its new blogger portal, MyColortopia.com. In addition to pre- and post-roll Glidden branding on the editorial videos, House Beautiful partnered with Glidden to produce the first sponsored video promoting Glidden’s MyColortopia.com.