Action Movie FX: A Branded App Without The Brand 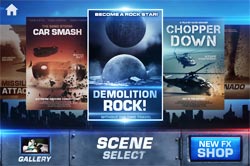 J.J. Abrams has plenty to sell. The talented action movie director and TV producer and owner of the Bad Robot Productions company that just released "Mission Impossible: Ghost Protocol" has another "Star Trek" movie coming and the "Person of Interest" TV series now on air.

But the Bad Robot Interactive unit chose not to put out another cheesy movie promo app throwaway that is clever for all of ten seconds. Instead, the company’s Action Movie FX app has been a presence scoring high on the App Store’s Entertainment chart for about a month now. No Spock. No Kirk. And thank God (or the "Eighth Dynamic," as Scientology might have it) -- no Tom Cruise.

The app does what Abrams and company actually do best -- cool action. This simply is one of the best implementations of video editing/overlay techniques I have seen on a smartphone. Instagram meets Michael Bay -- or, well, J.J. Abrams. The app allows you to take short video clips with the iPhone camera and then superimpose (pretty damn seamlessly, I may add) clichéd action sequences -- from incoming missiles laying waste to a ground zero that you pinpoint with a target reticule to a tornado, a mass of machine guns, or a ditched helicopter. I send laser-guided missiles into my desktop stapler regularly.

As a branding exercise, Action Movie FX might be seen as a missed opportunity. After all, here is this platform that is proving to be as popular as most top game apps. The opportunity to slip in a little promo of Cruise repelling from that Dubai skyscraper is obvious. Perhaps too obvious. Bad Robot gets the ambient benefit of simply demonstrating its technical prowess in one of the increasingly rare “gotta see this” apps that makes the dazzled user wonder who the hell made this app.

That may be good enough for Bad Robot, and adding in an easy, predictable pitch for a specific movie might break the indirect messaging already here –- these guys are cool, creative and now mobile-savvy. The ROI on that effect may be immeasurable, but how much would another MI marketing element have added to the saturation bombing we already experienced over the holiday?

And of course, Bad Robot has another little business cooking here, so why blow it? Users can upgrade with 99-cent packs of new effects, a tool for generating revenue and keeping the app refreshed regularly. Action Movie FX is the second-highest-grossing app in the Entertainment category of the App Store and in the top 50 overall. Sometimes those who brand least brand best.