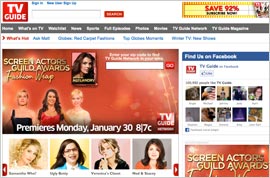 Lionsgate is looking to sell its stake in TV Guide Network, the underperforming cable network, which could be part of an overall sale of the network, per reports.

The 84-million subscriber network's owners have hired an investment banker as an advisor for a possible sale, according to the New York Post. The cable network and its related TV Guide Web site could be sold separately.

Lionsgate bought the cable network and website from Macrovision in February 2009 for $255 million. A couple of months later, it sold a 49% stake in the assets for $125 million to JPMorgan’s One Equity Partners and investors and TV Guide Network chairman Allen Shapiro.

The network, which has been slowly changing its format -- a TV screen that carries a program guide with reality/entertainment programming, off-broadcast network or off-cable network programming. Its longtime reliance on the program guide, which scrolls periodically at the bottom of the screen, has hindered viewership and advertising sales, according to analysts.

According to a MediaPost story in December, based on its negotiations with cable and satellite operators, more than 75% of TV Guide Network’s total distribution (80 million households) would be carrying the full-screen version of the channel, dropping its listings scroll altogether by the end of 2011.

ABC's "Ugly Betty" and Showtime's "Weeds," produced by Lionsgate, have been on its schedule.

Few established or independently own cable networks have changed hands in recent years. Lionsgate's stake could be worth $150 million to $200 million.

A Lionsgate spokesman did not respond to inquiries by press time.