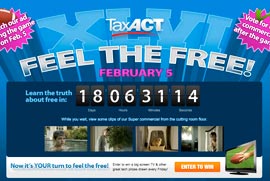 The big buy is part of a multi-dimensional marketing campaign that includes a website featuring out-takes of the 30-second TV spot and a sweepstakes.

The Cedar Rapids, Iowa-company introduced the first free federal tax preparation and filing solution during the 2005 tax season.  It remains the only free product that includes forms and schedules necessary for many complex returns filed by millions of people each year.

2nd Story Software's marketing efforts have focused on online advertising with some TV. The company made the bold leap to the Super Bowl this year in order to “cut through the industry's loud advertising noise,” particularly in the case of free tax products, says Kris Peterson, 2nd Story Software marketing vice president.

The Super Bowl’s timing and reach support those objectives. Taxpayers should have all their W-2s, 1099s and other forms needed to file their tax returns by the end of January.

The commercial uses a “courageous and gutsy” story to put viewers in touch with the feeling of being totally free at emotional, physical and psychological levels.

Although the plot will remain under wraps until the big game, 2nd Story Software is building up to it through a comprehensive marketing campaign spanning web, email and social media channels.

A new TaxACT web site, free.taxact.com, was launched this week. The interactive web site builds excitement for its Super Bowl commercial and the football game while reinforcing its free message. The site features sneak peeks of the commercial, offers the opportunity to enter and engage with other participants in the Feel the Free Fridays Sweepstakes, and tests visitors' football knowledge.

In addition, the “Feel the Free Fridays” Sweepstakes began on Jan. 5, the same day final versions of TaxACT were released. The sweepstakes introduces participants to TaxACT's "totally free feels good" message and engages them in a conversation about free with thousands of others.

The campaign was created by J.W. Morton and Associates, Cedar Rapids.