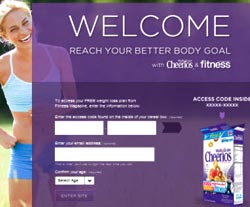 To access the free program, hosted on a custom Cheerios brand site, the consumer needs to provide an access code from inside a specially marked box of Multi Grain Cheerios (at least 7.5 million of the boxes, available in stores through June 30, will promote the program).

The online plan also links to the magazine’s site, and offers users a discounted subscription offer.

In addition, New York-based Meredith Video Studios is producing a series of custom videos for the cereal brand. The videos follow the progress of three girlfriends as they achieve their weight-loss and fitness goals.

The video kicking off the co-branded fitness program aired in early January on “The Better Show.” That daily lifestyle show, also produced by Meredith Video Studios, reaches nearly 80% of U.S. television households and is available in nine of the top 10 U.S. markets, according to Meredith. Meredith Corp. owns or operates 13 television stations that reach nearly 10% of television households.

Fitness will promote the plan on its Twitter account (75,000-plus followers) and Facebook page (260,000-plus “likes”), and Multi Grain Cheerios is likely to do the same, according to a spokesperson for the magazine. Multi Grain has its own Twitter account (currently about 1,700 followers) and is represented on the general Cheerios Facebook page (nearly 600,000 “likes”).