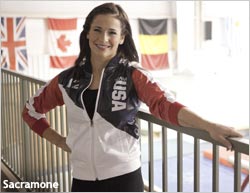 Procter & Gamble is inking a partnership with Alicia Sacramone, Beijing 2008 Olympic Games silver medalist in gymnastics. She will be ambassador for P&G beauty brands, according to the Cincinnati CPG giant.

Sacramone will tout such brands as Covergirl, Olay, Pantene and Secret. P&G already has a global partnership with the International Olympic Committee through the next five Olympic Games.

The musician and the two actors will serve as brand ambassadors, or "Gillette 'Masters of Style.'" Starting next month, the three will appear in television and print ads, digital media and PR.

The company also recently announced a plan to raise $5 million for worldwide youth sports programs as part of its "Thank You Mom" campaign leading up to the London Olympics. That program involves some 150 Olympic hopefuls, and numerous brands.