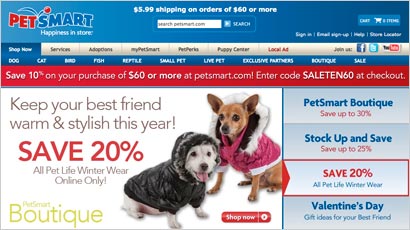 PetSmart, the pet supply retail chain, has awarded its media agency assignment to KSL Media after a formal review. The scope of work is said to include all traditional and digital media planning and buying.

The chain spends between $70 million and $80 million on ads annually, according to Nielsen.

Previously, Publicis Group’s Starcom serviced the account, after winning the business in 2007, in tandem with sibling creative agency Leo Burnett. The latter parted with the client several years ago, while Starcom continued to handle media duties.

Other shops participating in the review process were said to include WPP’s MediaCom, Mindshare, OMD, and Palisades Media Group.

Starcom issued a statement, noting: “While we are proud of the work we did to provide them with digitally driven, insight-powered human experience solutions, it was time for our companies to part ways and move forward.”

PetSmart, a public company that was founded in 1987, claims to be the largest specialty retailer of pet products and services, with nearly 1,200 pet stores in the U.S. and Canada. In November, the company reported net sales for the first nine months of 2011 of nearly $4.5 billion, up 7% from the same prior year period.

Reps for KSL and PetSmart did not return queries seeking comment on the decision.