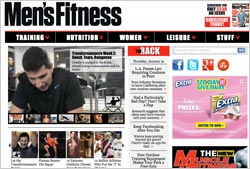 Men's Fitness Gets Site Into Shape

Men’s Fitness is relaunching its Web site, with upgrades including a wider variety of content and a new format.

Content on the new site will include fitness and nutrition -- and an increased emphasis on men’s lifestyle content, covering fashion, grooming and sports, among other subjects.

The site’s new format provides multiple points of entry for site visitors to its editorial content, while real-time blogs, updated periodically throughout the day, will serve as a public forum open to user contributions and commentary. Other enhancements include a recipe tool as well as social-sharing tools.

Separately, Men’s Fitness announced that it has partnered with Extra Gum for its 120-Day Get Fit Giveaway. The online promotion, running through March 29, is hosted on ExtraGum.com and features daily and Grand Prize giveaways of fitness-related products and services. The Grand Prize is an all-expense-paid fitness trip for two to Utah’s Red Mountain Resort. Highlights from the winners’ Grand Prize getaway will appear in a full-page advertorial feature in both magazines.

Promotional elements of the sweepstakes will be featured in the magazines as well as on their respective Web sites. The promotional push also includes displays at select Wal-Mart locations and in 5,500 CVS stores, custom header cards at 7,300 Walgreens stores and store circular promotions at Duane Reade and Supervalu/Safeway stores.

Playboy Enterprises is abandoning its Chicago headquarters and moving all its offices to Los Angeles, according to the Chicago Tribune, which reported that the venerable purveyor of cheesecake will close up shop in the Windy City by April 30. The move comes a month after Playboy announced its intention to move its editorial and art departments to L.A., and three years after it closed its New York City offices.

Hugh Hefner, a Chicago native, founded Playboy in Chicago in 1953. With its decline beginning long before the recent recession, Playboy’s total ad pages gradually dropped from 584 in 2002 to 386 in 2010, before rebounding somewhat to 438 in 2011, according to the Publishers Information Bureau.

While the Russian entertainment industry may sound like a contradiction in terms to some, it’s getting its own magazine courtesy of The Hollywood Reporter, which announced its intention to launch its first international edition this week. As with its American edition, The Hollywood Reporter: Russian Edition will cover Russian entertainment insiders, trends, celebrities and breaking news. The first issue of the magazines will hit newsstands in Russia in March; an accompanying Web site, www.thehollywoodreporter.ru, is also in the works.

Next Issue Media, the consortium formed by Conde Nast, Hearst, Meredith, News Corp. and Time Inc. to lay the groundwork for a broad transition to digital publishing, announced the appointment of Brodie Keast as executive vice president for marketing.

Next Issue CEO Morgan Guenther stated: “Brodie ... understands how Silicon Valley intersects with big media brands, and at a time of tremendous change and excitement in the $25 billion plus magazine industry.” Prior to joining Next Issue Media, Keast served as CMO of Prysm, a privately held company that specializes in new display technologies. Before this, he was senior vice president of marketing for Palm, where he led the launch of the webOS platform.

Catherine Sharick has been named managing editor of Time.com. Editor Rick Stengel noted that Sharick has played a role in attracting record-breaking audiences, including 11% growth in visitors in 2011 compared to 2010. Sharick first joined Time in 2002 as a Web producer; since then she managed a number of important projects, including the creation of the digital Time archive. She also oversaw editorial, production, and video, as well as four redesigns and the launch of new blogs and content streams, including Newsfeed, Healthland, Moneyland, Swampland, and Lightbox.