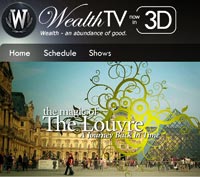 WealthTV, which offers programming targeting an upscale audience, said it has launched a 3D version. WealthTV said 3D programming will offer a travel theme with a look at the ruins in Machu Picchu and Louvre museum treasures.

The network is in about 12 million homes. Its 3D feed is available to some homes that are part of the National Cable Television Cooperative, a group that represents small cable operators. Roku boxes can also deliver the network to 3D- compatible sets.

It began offering 3D programming on an on-demand basis in 2010.

Network Vice President Cameron Westfall, who heads ad sales, stated that 3D “allows you to go places without having to spend a dime. It's the ultimate staycation channel."

The network, which carries the tagline “wealth -- an abundance of good” -- said it was at the early edge of the HD movement, offering all programming in HD in 2004.

Late last year, the network deviated from its typical fare to carry several fights organized by boxing promoter Don King and plans to offer matches in the third- dimension format moving ahead.

AT&T, Verizon and Knology offer the network. As it looks to gain distribution, the network carries its feed online for 99 cents a month.

WealthTV offered opposition as the government reviewed whether to greenlight the Comcast- NBCUniversal deal, suggesting the new entity might squeeze out independent networks.