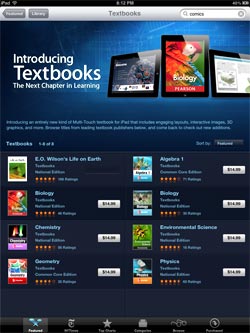 Apple appears to be digging into some of its own roots in the 1980s as a darling of the education market in the company’s new push to “reinvent” textbooks. Citing the high cost of school system books and the low levels of engagement among students with them, Apple executives took to the stage in New York yesterday to roll out new iPad apps and authoring tools designed to make school reading lists more fun, affordable and easier to develop.

On the supply side, Apple is offering the iBooks Author app that uses a Mac to create these embedded effects in texts and allows them to be published in the Apple Bookstore. Designed for non-professionals, the tools offer drag- and-drop and template approaches to book design.

The iBooks store was populated by eight initial texts aimed at the secondary and primary markets with $14.99 price points. Apparently, Apple intends to do to textbooks what it has done to music -- encourage lower pricing in return for massive and easy purchase and distribution. McGraw Hill Education and Pearson are among the early partners in this venture, and both are already represented in the textbook library.

Apple has also added a new iTunes U app that pulls together course materials into a single library. Lectures, quizzes, syllabi and other materials are all available. Apple claims there are a total of 20,000 educational apps now available.

One of the models that seemed to be introduced but not emphasized in the presentation was episodic book distribution. To demonstrate the capabilities of the new iBooks format, the E.O. Wilson book "Life on Earth" is offered in a free sample version. According to the book information, subsequent chapters will be released over the next year.

For media companies and marketers outside of the education arena, the iBooks 2 and authoring tools could open up a range of new content models. Conceivably, brands could create multimedia book experiences that have the functionality of apps but the heft and utility of books. The authoring tools and episodic models could help media and marketers see the bookstore as a place to distribute and market pamphlets, sponsored or branded books.

In challenging the pricing and distribution models of secondary and higher education, Apple is taking on an entrenched ecosystem. While the likes of Pearson and McGraw-Hill are sizable allies, decisions about school and class texts are complex, highly localized and immersed in bureaucracy.

Forrester analyst Sarah Rotman Epps writes at the company blog: “Large publishers will still dominate the majority of content sales nationwide; new apps will be largely supplemental to traditional or digital textbooks. But over time, we expect more widespread sales erosion for large publishers, which will try to recoup some value by acquiring the smaller app innovators.”

She sees potential for a surge of third parties helping publishers to enhance their works for digital distribution. But for now, digital textbooks only account for 2.8% of the $8 billion higher-education textbook market.