MetroPCS Gets Into Sports 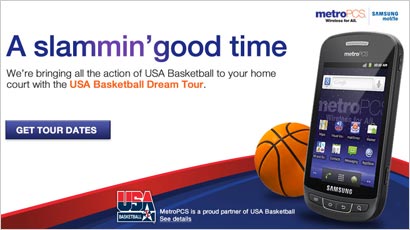 Dallas-based wireless company MetroPCS is sponsoring the Olympic USA Basketball team with a road show called the "USA Basketball Dream Tour." The tour, which started in Orlando, visits 15 markets twice each over the next seven months.

The tour wraps USA Basketball events, and meet-and-greets around a showcase of MetroPCS services and Samsung phones. The USA Basketball team will compete in the Summer 2012 Olympics in London. USA Basketball is the Colorado Springs, Colo.-based national governing body for men's and women's basketball.

Patrick Wong, director of field marketing and sponsorships. says MetroPCS’ partnership with USA Basketball is centered on grassroots. He tells Marketing Daily that the program focuses on MetroPCS’ newest Samsung phone, the Samsung Galaxy Attain 4G, which was recently announced and will be available soon.

Wong says the company has a range of sports programs. "There are a lot of instances where sports sponsorships make a lot of sense for our brand," he says. "Some sponsorships are national in scope, while others are strictly local. For example, we’ve got great local sponsorships with the Orlando Magic and New Jersey Nets, and then just three weeks ago we made our biggest announcement yet -- MetroPCS is the Official Wireless Partner of the (Ultimate Fighting Championship)."

The Dream Tour includes a MetroPCS-themed (purple and orange) mobile basketball court where consumers can compete. There are also mobile phone games, basketball trivia on Samsung phones, and photo and autograph opportunities with USA Basketball legends.

Among other cities, the tour will visit Miami, Atlanta, Los Angeles, San Francisco, Detroit, Boston, New York, Philadelphia, Dallas and Las Vegas. The company is integrating the tour with a Web site at www.metropcs.com/USABasketball and social media at www.facebook.com/metropcs.

Wong says the company takes a strategic approach when it comes to selecting sponsorships. "For example, we saw that UFC’s audience is a near-perfect match with our customer profile, so a partnership there made a lot of sense. The same goes for this partnership with USA Basketball. It really hits a sweet spot for our consumers, and was a great opportunity."

Wong points out that last week the company launched a new advertising campaign.

"We’ll also look to build awareness not only through continued sponsorships, like USA Basketball and UFC, but also through generating positive word of mouth," he says. "People are starting to talk about their positive experiences with MetroPCS -- the simplicity of our no-contract plans, our vast selection of Android-powered smartphones and even the freedom our customers have to scale their plan month-to-month." He says digital properties like Facebook and Twitter will "certainly play a big role."

MetroPCS is the fifth-largest facilities-based wireless carrier in the U.S. with over 9.3 million subscribers, per the company.