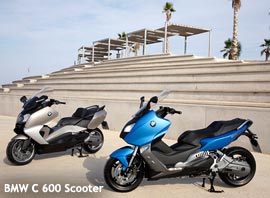 Motorcycles and scooters are a discretionary spend? Maybe that was so in the past, but it’s changing. As gasoline prices remain relatively high (and may go up again this summer), scooters and small motorcycle sales may benefit.

Ducati recently reported record sales numbers, as did BMW. And brands like Harley-Davidson, which had been a reliquary of aging consumers, are now getting the attention of younger consumers -- a feat that seemed impossible a few years ago.

“More and more, what used to be a two-car family is one car plus a motorcycle and scooter,” he says. “Since the start of the millennium, we have tracked miles and numbers of riders in the U.S. and the percentage of households with at least one bike. All of those numbers are up -- in some cases, dramatically so.”

“An important number is household penetration,” says van Hooydonk, adding that in 2003 5.4% of all American households had at least one bike. In 2009 that number had increased 7% to 6.8% of households.

And the median age has declined for the first time in many years. In 2003, Gen-Y represented 13% of the motorcycle population. In 2009, 29% of motorcycle riders were in that age group. “It used to be that boomers outnumbered Gen-Y four to one,” he says. “Now it’s 1.25 to one. And among younger riders, there's a greater percentage of women and diverse consumers.”

Part of the change is certainly driven by manufacturers. And that’s clear if one stands to the side of Honda’s display at the Progressive International Motorcycle Show in New York this past weekend at the Jacob Javits Convention Center. One can see 20-somethings lining up to swing a leg over Honda’s CBR 250.

Why aren’t they over at the 1,000-cc sport bikes? Well, consider an analogy in the automotive business. Automakers -- partly because of gasoline prices -- but also to get younger buyers into cars, have been rethinking the compact and subcompact segment, restyling for looks and flexibility vehicles in a once- maligned segment (back when SUVs ruled).

Next to the CBR 250 is Honda’s new NC 700x, a medium-sized motorcycle designed for multi-use urban mobility. The bike, for example, has a 21-litre storage compartment where the gas tank normally is, as the tank itself is under the seat. The bike can also be bought with digital shifting, and anti-lock brakes -- both options for people who are somewhat new to motorcycles.

All of this represents an ideological shift for the industry, notes Lee Edmunds, national advertising manager for the motorcycle division of American Honda. He tells Marketing Daily that until recently, off-road bikes were viewed of as entry points to motorcycles, but that the company is putting more focus on traditional on-road bikes like CBR 250 and even the new NC 700x as rider-friendly machines for bringing a new kind of rider more interested in enhancing their lifestyle than maximizing the torque curve.

“We see [NX 700x] as bringing in new buyers. It’s priced attractively ($6,999), gets good fuel economy (about 65 mpg) and is very versatile,” he says. “We have more and more bikes that appeal to other than just the enthusiast market. For a long time, entry to the Honda brand was through dirt bikes. Now we have a range of easier-to-ride products that appeal to a new buyer. We are definitely seeing a renaissance in smaller bikes.”

Motorcycle makers are also rethinking so- called maxi-scooters (scooters with larger engines). BMW is -- for the first time -- rolling into the big-scooter category as part of an effort to focus some of its business on the urban mobility market, a strategy that the corporation is employing in its automobile business as well.

Todd Andersen, marketing manager at the Woodcliff Lake, NJ BMW Motorrad, says the new C 650 maxi scooters will enter European markets this spring -- such as Italy, where big scooters are big business -- and in the much smaller U.S. market in the fall.

Andersen says expanding into new segments such as scooters is necessary, even though the total maxi-scooter market was about 2,500 units last year nationwide. “Our strategy for years had been to play to our strengths -- GS, Touring -- but there are diminishing returns in sticking with only two or three categories,” he says.

The first real effort to expand beyond touring and rugged-riding bikes was the RR superbike line, which competes in a hot segment, he says.

Getting into maxi-scooters will help BMW expand its owner base overseas, and win new U.S. consumers to two-wheeled transportation, and BMW car owners, or “consumers who had never thought about two wheels,” he adds.

Andersen says he will favor below-the-line marketing in key cities and regions where scooter sales are strong like California, Florida, New York, and -- surprisingly -- Pennsylvania and Ohio. “We want people to experience the scooters,” he says, adding that BMW will likely do test-ride events, and cross-branding and cross-promotional programs.