Kraft Cheese Veers A Bit From The Mainstream 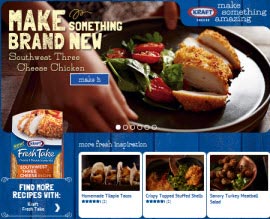 The new campaign from Kraft Cheese is unusual because it spans five product lines, and because of its scale: With a budget of approximately $50 million, it’s Kraft’s single largest cheese/dairy campaign in a decade.

But its content approach -- and the creative process behind it -- also represent something of a departure from typical recipe-oriented cheese-category marketing, says Jill Baskin, senior director, marketing communications for Kraft Cheese & Dairy.

The campaign encompasses Kraft’s Singles, Natural Slices, Natural Shredded Cheese, Grated Parmesan and Fresh Take (the last is a new line of cheeses blended with seasoned breadcrumbs) because Kraft’s consumer research confirmed that consumers keep multiple types of cheeses on hand to use for a variety of purposes.

Importantly, the research -- which included spending time with consumers in their kitchens to “explore their relationship with cheese” -- also revealed significant changes in what constitutes meals and how people are cooking today.

“People no longer feel tied to old rules, like needing to prepare full, traditional dinners,” says Baskin. “Dinner might be a plate of nachos, or a salad, that includes protein and vegetables. Also, they’re more comfortable now with winging it and getting creative. For instance, they might scan a couple of recipes on the Web, and then create their own hybrid recipes.”

As a result, the new “Make Something Amazing” campaign is premised on providing today’s more flexible and sophisticated home cooks with restaurant-inspired recipes that encourage experimentation and customizing to personal preferences.

“We’ve gone a little more up-market” to assist consumers who are looking for inspiration to take dishes to the next creative or taste level, through simple or more involved recipes, Baskin says. The campaign seeks to make an emotional connection by positioning Kraft cheeses as providing the spark of inspiration behind meals that create “amazing moments” with family and friends.

The Kraft Cheese area within KraftFoods.com features 30-second recipe videos. Recipes using various Kraft cheeses, with links to the videos, are spotlighted in rotation, with bold inspirational messaging (“Make something brand new…Make something expressive…Make something outstanding…Make something game- changing”).

Recipe examples include Southwest three-cheese chicken, homemade tilapia tacos, crispy-topped stuffed shells, savory turkey meatball salad and a variety of dishes and dips featuring artichokes with parmesan or other cheeses. “Many people are trying dishes with artichokes or other ingredients that they’ve enjoyed in restaurants, and now want to know how to prepare at home,” notes Baskin. “Cooking magazines offer these types of recipes, but that’s not the typical approach for recipes from food companies.”

Like other elements in the campaign, the videos are big on visuals and light on copy, and the site encourages users to post their own recipe versions, as well as review recipes and share them through Facebook or Twitter. Agency 360i is handling the campaign’s digital components.

Because driving consumers to the cooking videos is critical, in addition to extensive online advertising, Kraft is working on contests and other online/social media promotions designed to forward that objective, according to Baskin.

Television is a major component of the campaign. Kraft kicked it off with a big-splash, 60-second anthem TV spot showing families having fun at home creating dishes with various Kraft cheeses, backed by an upbeat song (“Bright Idea”) composed and recorded by the popular Canadian indie band Mother Mother. The spot’s only voiceover messaging, at the end of the fast-paced visual vignettes: “At Kraft, we’re stretching our cheese as far as it can go. So go ahead…make something amazing.”

The McGarryBowen agency employed somewhat non-mainstream methods for the creative, reports Baskin. The campaign’s theme song was chosen from original submissions commissioned from multiple artists, who worked from a creative brief provided by the agency. As of Jan. 17, the Mother Mother song is downloadable on iTunes (for $0.99), and Kraft is exploring other options for leveraging it, such as ringtones and Shazam.

Furthermore, because the goal was to maximize the emotional connection by portraying “real,” relatable families and food (alluring but not “super-perfect” food, in Baskin’s words), the creative team scouted real homes/kitchens as potential shooting locations, and while doing so, identified real families who fit the desired demographic profiles (ages, diversity, etc.). Result: The people in the spots are indeed real families who agreed to participate, rather than actors chosen through a typical casting process.

The 60-second, cross- brand spot debuted on the People’s Choice Awards (Jan. 11) and Golden Globes (Jan. 15), and will also air on “American Idol” on Jan. 25. A 30-second version of the multiple-brand spot is being created as a result of strong, positive consumer response to the long version (social media postings, buzz), according to Baskin, with its airing schedule to be determined.

In addition, the agency created several 30-second spots for individual Kraft Cheese products. One is for the just-launched Fresh Take (offered in six varieties, such as chili-lime and panko, the cheese/breadcrumb product is combined with poultry or fish to create entrées with just five minutes of prep time). The shredded cheeses, shredded varieties that feature “a Touch of Philadelphia Cream Cheese,” and Big Slice Natural Slices (launched last year to complement now-common bigger bread slices) are among other products with their own spots.

The individual-product spots were shot simultaneously with the cross-product spot, and have the same creative tone/overall theme and anthem song, but spotlight the specific products’ core benefits/USPs. These spots began airing in targeted markets on Jan. 9.