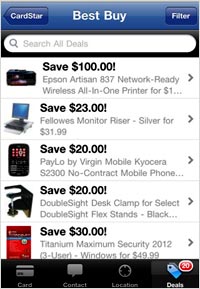 Constant Contact says the acquisition allows it to grow beyond the email marketing services on which the company was built and create a suite of engagement tools for businesses. “CardStar’s unique mobile application is a natural extension of our brand, bringing consumers and merchants together before, during and after the sale,” states Constant Contact CEO Gail Goodman.

CEO Andy Miller tells Boston.com that his company had raised about $1.75 million in funding, including an investment from Verizon Ventures. CardStar executives Miller and CTO and founder Danny Espinoza will join Constant Contact, as will the other employees of the company, but the CardStar brand will be maintained.

CardStar’s app is present on six mobile platforms, including iOS, Android and Windows Phone 7. The app supplies merchants with a scannable barcode that customers can use in place of a physical card. The app also funnels deals and discounts to the consumer from the partnered vendors.

While CardStar is best known for its partnerships with major chains and their nationwide store loyalty programs, Miller tells Boston.com that the model also applies to the small and medium-sized local businesses that Constant Contact also serves. Merchant punch cards can be stored in the same app as one’s CVS card. The merchant can send special offers to customers directly through the app and even leverage email as a secondary channel of contact.