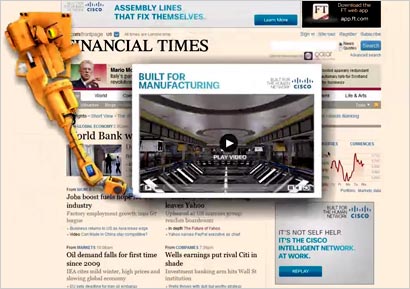 Cisco Systems becomes the first company to launch a targeted video ad campaign aimed at 140,000 C-level executives on LinkedIn. The video-embedded ad landing in member in-boxes Thursday will also click through to a landing page explaining how Cisco's intelligent network relates to their business, according to Cisco CMO Blair Christie.

Aside from LinkedIn, the social campaign will also appear on Twitter. Ogilvy Los Angeles created the campaign, which includes television, print and takeover pages on dot-coms.

The thirty-second video ad for the campaign, Built for the Human Network, debuts on television this weekend during the NFL and the AFC championship football TV games. It highlights machines on an assembly line working together to get products built. When one machine breaks down, another stops production long enough to help the other machine in need. Then it returns to work with the other machines.

"The ads will show real-life examples of how our customers can change their business models and change the way they operate by building a network," Christie said. "The ad campaign hopes to show how the network enables customers to do amazing things."

This week, Cisco will use the ad to take over the front page of the online versions of Financial Times, CNBC, Wired, The Street and The Atlantic. The ad, which required a rebuild for each site, will have social buttons to share the content.

In print starting Monday, The Wall Street Journal will run a six-page manifesto, along with ads in Financial Times, Economist and others. The pages will tell how Cisco clients improve processes. Readers will find the articles on several companies that looked at traditional ways of improving business by adding a Cisco network.