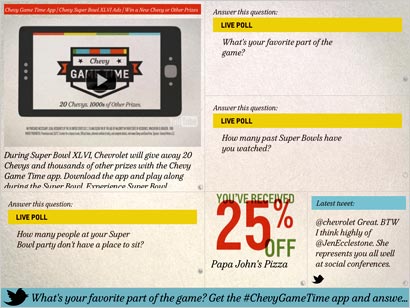 Advertisers are spending millions of dollars a minute to get fractional face time during the upcoming Super Bowl. Chevy is setting its sights higher (or lower) and wants to be on your lap throughout the game.

Released this weekend for iOS and Android, the Chevy Game Time app is designed to be run in tandem with the Super Bowl as a second-screen experience, including polling and contests for winning 20 Chevrolet cars and other prizes from marketing partners such as Sirius XM Radio, Bridgestone, Motorola, the NFL, Papa John's Pizza, NFLShop and others.

The app enables the user to play the Chevy TV spots by giving him a unique 7-character ID that wins if it matches a license plate in any of the ads. “Watch our commercials, win our cars,” the app instructs. Chevy commercials are available on demand in the app as well as Twitter streams, trivia and polls that post your responses to a connected Facebook account. The user will be entered automatically into contests when he answers questions correctly.

Chevy says the game app is only one of several programs it will run around the Super Bowl. The brand will be an exclusive advertiser for the NBCSports desktop and tablet live-streaming coverage. The company has also partnered with Twitter and the NFL for a “Road to the #SuperBowl” promotion on that social network.

According to Joel Ewanick, global chief marketing officer for General Motors, the app is part of a multi-pronged strategy to extend the brand’s reach well beyond the traditional and costly TV spots during the big game. “With these initiatives, the traditional ads on the Super Bowl broadcast and additional initiatives we will announce soon, we expect more than 1.5 billion impressions of our message on game day and beyond,” he says in a statement.

While the role of mobile media in past Super Bowls has been uneven and tepid at best, brands and media companies appear to have mobilized much more aggressively this year. This year’s Super Bowl not only will be streamed online -- for the first time it will go to Verizon customers on their smartphones via its NFL Mobile app.