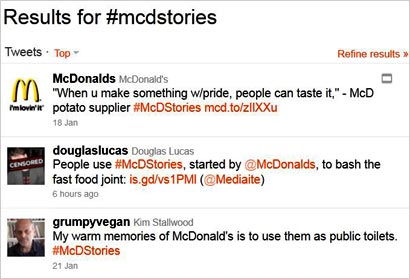 It seems to go without saying that brands trying to spark viral success via social media always run the risk of a backfire. And yet someone needs to say it once again to McDonald’s. Late last week, the company’s official Twitter feed invited its quarter of a million followers to share their own favorite stories about visiting McD’s. “’When u make something w/pride, people can taste it.’ –McD potato supplier #McDStories” stated the invitation for others to share their views at the new hashtag.

Oops. A torrent of bad reviews, accusations and vegetarian resistance ensued as many in the Twitterverse filed to bite on the invitation to sentimentalize the fast-food chain. Among the top tweets at the hashtag this weekend:

“My memories of walking into a McDonald’s: the sensory experience of inhaling deeply from a freshly- opened can of dog food,” posts “vegan.”

“It’s made of 100% beef, but they use stuff like cow eye & cow tongues in their hamburgers. Learned this today../” “XOMelissaEmily” accuses the company in her post.

In its initial posts, McDonald’s intended to share background and human interest pieces about the farmers and suppliers who provide the chain with its ingredients. The kickoff post links to a well-produced YouTube video of a potato farmer talking about his work. The video has been viewed over 66,000 times, according to the YouTube count.

Otherwise, the #McDStories seems to have been an open invitation for people to post about mishaps, myths and mayhem associated with the iconic brand.

Mobile Marketing Daily attempted to contact McDonald’s for comment, but has received no statement from the company.

UPDATE: McDonald’s Social Media Director Rick Wion spoke with Mobile Marketing Daily mid-Monday about the Twitter campaign. Wion said that the promoted Tweet initiating the hashtag was monitored closely as it attracted responses. It was one of two promoted tweets the company had acquired from Twitter for use last week, the other being #meetthefarmers. “This was something that was unfortunate,” he says. “We were watching it. And what we saw was that #McDStories at first was fairly balanced. But then it got more negative than positive. We quickly made the decision to go back to #meetthefarmers, so we pulled that hashtag. It was up for two hours. When we pulled it the conversation on #McDStories went down to nothing by 5 pm.”

Look for a follow-up report with further details on the McDonald’s Twitter campaigns in an upcoming edition of Mobile Marketing Daily.