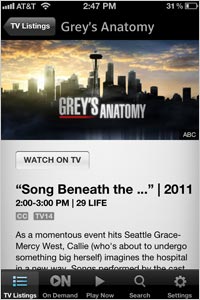 In the long term, place your bets on TV content. Hulu is glomming ad dollars and YouTube has traffic and now more original content. But according to a new research note from Needham’s analyst Laura Martin, those are small potatoes compared to the ad money TV media will bring with its content across platforms.

“We estimate that the rollout of TV Everywhere over the next 3-5 years could add approximately $12 billion of revenue annually to the U.S. television ecosystem,” says Martin. Not only will this scale “dwarf” current digital entities like Hulu and YouTube, but she sees this revenue as low risk and additive rather than cannibalistic of the TV business.

The lion’s share of this new revenue will be realized in advertising -- up to $10 billion a year, as content owners sell across TV, Web, smartphone and tablets. She also sees more revenue coming through the pipes, with the cable, satellite and telco delivery systems that could have the capability of charging for added value.

“We believe that TV Everywhere will be one of the primary drivers of valuation growth for today’s TV ecosystem over the next five years,” says the report.

I can’t say I am sure that standard ad loads will survive the journey off of the TV. Sure, some of us are getting used to watching entire TV episodes on our smartphones or tablets, but two-minute breaks? That might be pushing it.

The less-discussed aspects of a TV Everywhere model that relies as much on devices as on the Web involve how it affects the mobile marketing ecosystem, After all, when you have the serious money TV advertising represents making its way onto time-shifted viewing on mobile, you have enormous incentives to push that content. How about mobile banners on Monday morning asking if you missed "60 Minutes" last night, which can actually push you directly to the episode? Even if a smartphone user isn’t ready to lean-back for a 30- or 60-minute episode right then and there, the mobile phone becomes a remarkable time-shift scheduler.

My phone should be empowered to push that "60 Minutes" episode to my screen of choice for later viewing. Once our phones can reliably manage TV content around DVRs, set-top boxes, Web and connected TVs, then the mobile device doesn’t even have to be the viewing screen to be a powerful part of the media consumption funnel that advertisers will want to touch.

Whether as a remote control, a second-screen experience, as a personal media scheduler, or as an alternative location for straight consumption, mobile platforms are destined to be integrally involved in TV’s future -- here, there and everywhere.