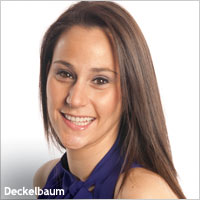 Ensemble, the Interpublic branded entertainment firm, continues to expand with the appointment of Rochelle Deckelbaum as vice president of branded content.

Deckelbaum was hired away from competitor Green Room Entertainment, a unit of Omnicom Media Group. She reports to Scott Donaton, president and CEO, Ensemble.

She will be responsible for strengthening ties to content creators, including production companies, studios and talent agencies. Working with producers, she will also oversee the development of integrations and original content for clients. Deckelbaum will take the lead on client L’Oreal, among others.

Commenting on the hire, Donaton described Deckelbaum as a “brand-savvy innovator.” He said the appointment was a response to clients “asking us to do more and more,” particularly within the consultative and content strategy disciplines.

The hire is the second recent expansion move by the 2-year-old branded content unit. In August, Ensemble opened a Los Angeles office and named Neil Hamel to run it as West Coast director. That move was somewhat unique in that Hamel retained his duties as a client lead at sister agency Initiative's Innovations division. At the time, the move was described as a "partnership" between Ensemble and Initiative, given Hamel's new dual role.

Initiative is just one of the agencies that Ensemble works closely with inside IPG to develop branded content programs for clients. Others include UM and a number of the holding company’s creative agencies. In some cases, it works directly with its own clients.

Donaton said the firm is usually working on between 18 and 24 projects at any given time. Recent efforts included “Always Open” for Denny’s, an online series featuring comic David Koechner seen in each episode conversing with various celebrities over food at a Denny’s restaurant. Another was “Alter/Egos” for BMW -- featuring celebrities like Donna Karan and Kevin Bacon, but which focused on little-known aspects of their lives. Both of those efforts came in 2011.