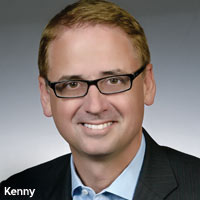 Kenny succeeds Mike Kelly, who joined the company as president and CEO in 2009. Kelly will serve as a special adviser to the CEO and the board of directors of TWCC. In addition, he has been named an adviser to Bain Capital, part of the consortium, along with The Weather Channel Cos., Blackstone Group and NBC Universal, which own the company.

Previously, Kenny was president of Akamai, the cloud platform. Before that, he served as managing partner of VivaKi, the digital arm of Publicis Groupe, and was CEO at Digitas. Kenny stated that he joined his new concern “because weather is fascinating.”

The consortium added that Kenny had the “experience and vision to drive global initiatives across all platforms.”