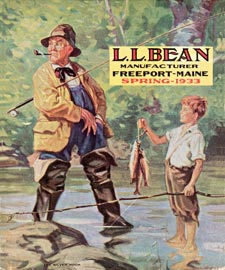 Maine retailer L.L. Bean is turning 100 this year, and as part of the birthday festivities, is targeting America’s couch-potato kids. Working with the National Park Foundation, Bean will spend $1 million to increase outdoor recreation among families, and introduce more children to America's national parks. Called the Million Moment Mission, the effort is based in part on research that shows the average kid spends less than one hour a day outdoors.

The company is also celebrating with vintage catalog covers, and a ginormous Bean Bootmobile, currently tootling through America, where it will invite people to them to get outdoors and try a new activity, with the help of the company’s expert Outdoor Discovery Schools guides. (The Boot could probably kick the Oscar Mayer Wienermobile’s buns: Bean says it is 13 feet high, 20 feet long, and built true to scale, so that it is exactly 20.5 times larger than a traditional 12" tall boot.)

Of course, whether such birthday events impress consumers is another question. "Heritage brands need to stay relevant, and can't trade on history alone,” Ted Zittell, a partner at McMillanDoolittle, a retail consultancy, tells Marketing Daily. “Clarity of offer is key,” he says, and consumers have to see that the brand, and the events, are relevant to them today, not just a page in history, however beloved. “Otherwise, it's a celebration for company insiders only,” he says. “Customers won't come.”

That said, Zittell thinks the Bootmobile concept “could be a great idea. Mobile and pop-up take well-defined brand experience to the customer in an innovative, convenient way.”

For Bean, based in Freeport, Maine, the thinking seems to be that linking the brand to the great outdoors is that key to relevance, and certainly, helping sedentary families get moving is on many people’s radar these days.

“Our founder, Leon Leonwood, believed that spending time outdoors was fundamental to happiness in life. This belief was the guiding principal our company was founded on and still continues to drive us in all we do, 100 years later," says L.L.Bean CEO Chris McCormick in announcing the new program. "Through the decades we have received many letters and stories from people sharing their passion for nature and outdoor recreation. In the world we live in today we have the ability to share and influence the conversation in a way we hope will re-ignite America's love affair with the great outdoors and help families pass that passion on to the next generation."

But Bean isn’t neglecting its own heritage. New catalogs, now arriving in mailboxes, feature a photographic version of the company’s first-ever catalog, mailed back in 1933, with an old man and his fancy fishing pole grouchily paying a kid with a stick and a string for his trout. (The photo was shot in Maine’s own Acadia National Park). Bean is also selling prints of both covers for $99 each.

The privately held retailer says its 2010 annual net sales were $1.44 billion. Separately, the company says it has signed a three-year partnership with Gold Medalist Seth Wescott, also a Maine native. In addition to appearances, the famed snowboarder will work with the company’s outerwear developers testing and development.