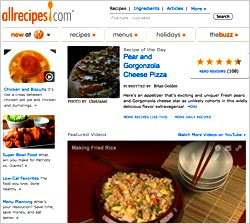 Meredith Corp. is continuing its buying spree with its acquisition of digital food site Allrecipes.com from The Reader’s Digest Association, significantly boosting Meredith’s digital reach among the female audience. The transaction was valued at $175 million, and is expected to close later this quarter.

The acquisition of Allrecipes.com should more than double the audience of the Meredith Women’s Network, to around 40 million unique visitors per month, according to the company, and should also double its advertising revenues.

The platform’s mobile apps have been downloaded by over 11 million consumers, and it also hosts the top food channel on YouTube. According to Meredith, Allrecipes.com’s U.S. audience is 70% female, with a mean household income of $73,000 -- and includes nine out of 10 primary decision-makers for grocery purchases.

More broadly, the acquisition of Allrecipes.com will give Meredith a new potential customer pool for marketing print and tablet magazine subscriptions, as well as e-commerce opportunities, including foreign audiences that visit 17 Allrecipes.com sites in 22 countries around the world.

The acquisition represents a significant addition to Meredith’s growing portfolio of food-related properties and women’s interest publications in general. In October of last year, the company acquired cooking mag Every Day With Rachael Ray and its related digital properties from the Reader’s Digest Association.

Meredith Corp. also announced its fourth-quarter results, which showed total revenues declining 10% from $366 million in 2010 to $329 million in 2011. The decline was attributed to the absence of political advertising related to 2010’s midterm elections and continuing weakness in magazine advertising demand.