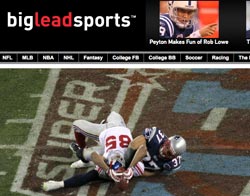 Building its network of sports enthusiasts, The USA Today Sports Media Group has acquired Fantasy Sports Ventures  and its crown jewel Big Lead Sports. Financial terms of the deal were not disclosed, but it was rumored to be in the range of $30 million.

USA Today parent Gannett Co. was already a minority shareholder of FSV, and said it elected to complete the purchase through the acquisition of FSV's assets.

Founded in 2006 by former NFL digital chief Chris Russo, FSV has thrived by amassing a network of hundreds of small, independent sites focused on niche sports and topics.

At last count, FSV were drawing in about 19 million unique visitors, according to Gannett, citing comScore data. Gannett says the combined property will place it into the top five of digital sports properties.

Among other new additions to its network, Gannett is getting TheBigLead.com, a source of news and commentary across all sports; BaseballHQ.com, KFFL.com, TheHuddle.com, Baseball-Reference.com, HoopsWorld.com, and HoopsHype.com.

Online, sports fare is hotter than ever. As big a sign as any, this year’s Super Bowl will be simulcast on NBCSports.com and NFL.com.