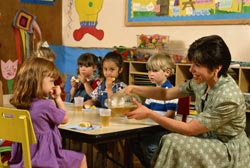 The U.S. Department of Agriculture has issued a final rule requiring new, healthier nutrition standards for school meals – the first major changes in these standards in 15 years.

Based on recommendations from the Institute of Medicine of the National Academies, the standards bring the National School Lunch and School Breakfast Programs into alignment with Dietary Guidelines for Americans.

The standards, which were mandated by Congress in the Healthy, Hunger-Free Kids Act that was signed into law by President Obama in late 2010, “are one of the most important advances in nutrition in decades,” said Margo G. Wootan, nutrition policy director for nonprofit nutrition advocacy group The Center for Science in the Public Interest. “They’re much needed, given high childhood obesity rates and the poor state of our children’s diets.”

In another first, the Act requires that government nutrition standards also be extended to non-subsidized foods sold a la carte in cafeterias and in school stores and vending machines. The USDA is expected to propose standards for these foods, similar to those for subsidized meals, within the next month or two.

In response to food-industry lobbying, Congress last year blocked some of the requirements included in the USDA’s original subsidized-meals program proposals, including limiting pizza and French fries, and limiting potatoes to two servings per week. A bill also continued the practice of allowing schools to count the tomato sauce on pizzas as a vegetable.

Schools are required to be in compliance with most of the new standards by July 1. The Healthy, Hunger-Free Kids Act will provide schools with additional funding, training, model menus and recipes, healthy product specifications for commodities, and more frequent reviews to assist them in complying.

Approximately 32 million children eat school lunches and breakfasts, providing half of many children’s daily calories, according to the USDA.