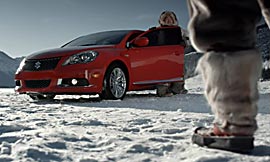 Suzuki is back in the Super Bowl this year with a regional buy focusing on its core cold-weather markets. Last year, the automaker did its first such regional buy in 14 markets during the Super Bowl broadcast. This year, the automaker is doubling down, putting a much more elaborate -- some of them 60-second spots -- ad in 21 markets. Again, the focus is on the all-wheel-drive version of its popular Kizashi sport sedan.

While last year's ad had antagonistic snowmen attacking a Kizashi rambling through the snow, this year's ad offers a panoramic vista of the Canadian Rockies at sunset, from a frozen lake. An Inuit woman waits outside an igloo on the lake for her husband to return on his dog sled. Instead of a sled, however, he comes over the ice in an all-wheel-drive Kizashi. His passengers? His dogs. He reaches over and tunes the radio to a rap song, and he and the dogs start bobbing their heads. When he arrives at the igloo, his wife isn't pleased.

Jeff Holland, director of social media and communications for Brea, Calif.-based American Suzuki Motor, tells Marketing Daily that last year's campaign brought a big sales boost in core winter markets. "In those 14 markets, we saw sales increase 54% in February, versus a 4% increase in other markets nationwide, so the spot was very well received," he says.

Holland says the ad buy is especially serendipitous this year because Suzuki's biggest retail footprint and cold-weather region is the Northeast, from which Super Bowl combatants the Boston Patriots and New York Giants hail. "We shared the new ad with dealers in Denver four days ago and got a great response." He says that in addition to cities in the Northeast, the spot will run in Chicago, Dallas and Denver.

Rob Siltanen, chairman and co-creative director at Suzuki's AOR, El Segundo, Calif.-based Siltanen and Partners, says the agency shot the ad outside of Calgary, Canada, on a lake covered by an 11-inch-thick sheet of ice. The actors, who speak Inuit in the ad, are indeed from that ethnic group.

"This has a number of different things going for it," says Siltanen. "When it starts, you think it's perhaps a National Geographic spot, then it takes you into a rap music video place, and at the end a classic husband/wife conflict -- that he bought a car without her consent."

The ad also directs viewers to the URL kizashikicks.com, and uses the tag, "Upgrade Your Ride."

Suzuki doesn't have the marketing muscle to compete nationally with tier-one and -two players, so the company is taking a regional approach that focuses on major markets. "Our feeling is that if you aren't going to outspend, you have to outsmart and out-fascinate," says Siltanen.

Holland says the company will also expand its Kizashi Kicks road show in summer 2012 that ties to concerts, festivals, and other events, and offers product information and test drives.