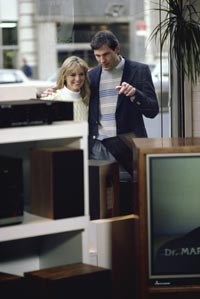 So, here’s one to mull: According to an extensive survey of more than 4,200 adults, every one of them bought some sort of consumer electronics device during the holiday season.

That’s 100%. And not a “margin-of-error” 100%, either. A deep-dive into the survey results revealed that every one of the 4,200 people surveyed (from a representative demographic of the United States, median annual income of $50,000) answered in the affirmative when asked whether they had bought a consumer electronics device during their holiday shopping.

“I was floored,” Janet Eden-Harris, chief marketing officer at Market Force Information, which conducted the survey in January 2012, tells Marketing Daily. “It was a representative mix of consumers. It’s a representative sample [of demographics] and income levels. And every single one said they bought some kind of consumer electronics device.”

Video games and gear and televisions and accessories led the purchases. Thirty-two percent of consumers said they purchased video games, gear and accessories, while 31% said they bought TVs, DVDs and other equipment. Smartphones and digital cameras were tied for the third-most-popular gifts, at 24%, while 23% of survey respondents bought a computer. Despite the hype, iPads were cited by only 21% of respondents, while Kindles were cited by 20%.

“If we think about what the category has done over the last decade or 20 years, so many [devices] that didn’t exist before have become a must-have item and so many items have been incorporated into our daily routine,” Eden-Harris says. “They aren’t luxuries anymore; they’re must-haves.”

When it came to making those purchases, people generally preferred to head to a brick-and-mortar retailer instead of making online purchases. Among those surveyed, 100% said they bought at least one device from a retail store, while only 35% said they made a purchase online. The reasons people preferred retail locations included the ability to walk out of a store with a purchase, in-store promotions, to avoid shipping costs and to get a personal demonstration of the device.

When it comes to those in-store purchases, the sales associate plays a huge role in a consumer’s decision. According to the survey, more than three-quarters of shoppers said they were helped by a salesperson. Forty-four percent of them said they received a specific product recommendation from that salesperson, and 85% bought the product that was recommended.

“It tells you how critically important … having a knowledgeable salesperson is,” Eden Harris says.