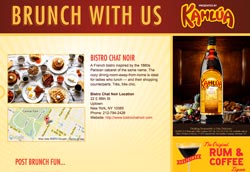 Lifestyle publishers build sponsored online city-guides all the time. Playing with the formula, Thrillist has partnered with its fairer equivalent DailyCandy to launch a Kahlua- sponsored dining directory.

Neither publisher, however, is taking credit for the idea. Rather, Vizeum -- on behalf of Pernod Ricard’s Kahlua brand -- approached Thrillist and DailyCandy separately, according to Jody Rones, director of advertising at Thrillist.

“They were looking to build a campaign focused around brunch that reached both men and women, but that spoke to each directly,” said Rones. The result was “Brunch With Us” -- a microsite edited by both publishers to provide male and female visitors with fitting food recommendations.

Scheduled to run through the summer, the mobile-friendly site features a tool for users to filter eateries by unique preferences, including “hangover cure,” “good for groups,” “alfresco” and “great for out-of- towners.”

“For our guys, we knew that with football season drawing to a close, weekends tend to be sort of vacant. So we came up with the idea for a site that would provide brunch and post-brunch activity recommendations,” Rones explained. “Out of that, 'Brunch With Us' was born.”

Site visitors also receive suggested post-brunch itineraries, featuring a list of editor-approved hangout spots and shops. To promote it, both Thrillist and DailyCandy have created campaigns on their respective Web properties.

“It was a one-off partnership around this specific campaign," Rones said. "But based on the success of this program, we’re open to exploring other opportunities.”

How will Rones measure success? “We’re going to be looking at site traffic and overall engagement,” he said. “I also believe if this saves one couple from an argument on where to go to brunch, this program was a success.”

Thrillist remains an independent company, with some of the same investors as DailyCandy, including former AOL COO Bob Pittman.