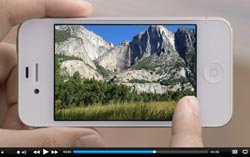 Although largely over the ‘V’ word, marketers still love to see their work spread organically online.

Which brands are best at getting people to share their messages? Well, despite consumer clamoring for the iPhone 5, Apple’s introduction of the 4S was the most-watched video spot during the fourth quarter of 2011.

Overall, the campaign was streamed more than 35.8 million times -- becoming the brand’s most-viewed ad of all time after only three weeks, according to new research from social video analytics firm Visible Measures.

Apple’s campaign was heavily driven by audiences, with more than 450 copies and derivatives that generated over 50% of the views for the entire campaign.

After Apple, Google remains the second-most-watched brand for the third quarter in a row. Up more than 10 million views during the quarter, the search giant has launched ten new campaigns since October.

Google’s Chrome campaign "The Web Is What You Make Of It" continues to drive viewership for the brand, but the newly launched campaigns "Chromebook," showcasing the new Web-only laptop, and "Zeitgeist," the spot highlighting the events of 2011, also helped garner views.

With more than 10 active campaigns and over 21.4 million views, Lenovo was the third-most-watched brand of the quarter.

Promoting a global contest among students to have their scientific experiments performed at the International Space Station, YouTube and Lenovo’s co-branded effort "Spacelab: What Will You Do?" was also a hit with over 18.8 million views.

Overall, consumers watched online video ads over 745 million times during the fourth quarter -- more than a 25% increase since the third quarter, and more than a 35% increase year-over-year.

Yet unlike TV networks, marketers can’t draw a clear line between viewership and success. Illustrating this point, failed Republican primary candidate Rick Perry had the most-shared campaign video of the quarter. Released a few weeks before the Iowa caucuses -- and containing his controversial views on religion and gays in the military -- Perry’s "Strong" spot was watched over 15.8 million times.

In another example of notoriety, Megaupload’s "Megaupload Song" attracted more than 14.3 million views in less than a month, thanks to a star-studded cast and a healthy dose of controversy.

The music video features celebrities like Kim Kardashian, Kanye West, and Will.i.am declaring their love for the Internet storage brand. As Visible Measures reminds us, the controversy exploded in early January when Megaupload was shut down when the Department of Justice indicted a number of its executives, calling it “among the largest criminal copyright cases ever brought by the United States.”

Also of note, apparel and accessories topped all verticals during the quarter with more than 83.7 million views -- yet down slightly quarter-over-quarter.