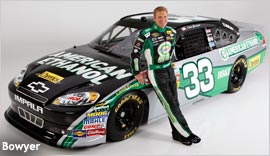 The National Association of Stock Car Auto Racing (NASCAR) is going to run its own digital properties, something Turner Sports has been doing for NASCAR for the past decade. The association will be taking operational control of its own digital rights starting in 2013, while continuing its digital partnership with Turner Sports through at least 2016, in an arrangement that gives Turner Sports oversight of advertising sales and sponsorships across all of NASCAR's platforms.

The change is part of NASCAR's five-year plan to improve the event experience, increase driver star power and develop new audiences, in particular youth, Gen Y and multicultural, per VP of digital media, Marc Jenkins. It’s also about making the association’s digital properties more compelling to casual fans and new fans to the auto racing circuit, but without alienating the core fan base.

"We will be building the sites, maintaining them, while they will sell advertising," he says. "The reason why it's important is because the digital channel drives our strategic imperatives; it's a key component of our five year plan, and we are situated to invest in the digital space in a way that a third party wouldn't be."

NASCAR will assume operational control next year of all of its interactive, digital and social media rights including technical operations and infrastructure of all NASCAR digital platforms. Jenkins tells Marketing Daily that the plan is to build a portfolio of platforms to appeal to a more diverse audience that includes casual fans and people new to NASCAR, not just the committed, hard-core fans. "A few years ago the key for us was maintaining a core fan base. Now we also want to serve a broader base, so the experience has to be flexible for all various type of fans."

Jenkins says traffic to NASCAR.com is strong, but there are a number of programs on NASCAR's plate to drive business, bring in new people, engage casual fans, and push content out to others who aren't visiting NASCAR.com, partly by putting a bigger focus on links to social media. "From our standpoint, the strategy is to take content and distribute it to digital channels not necessarily our own. A fan comes to us when they want to experience NASCAR -- but they should be able to find it on YouTube, Facebook, Twitter when they are out doing social media."

As for Turner Sports, "They were doing a great job, but there are a bunch of things we need to do that would be unfair to ask them to handle," he says, explaining that NASCAR would essentially be asking Turner for a big favor, as they wouldn't be getting ROI applied directly to their business. At a certain point you can't ask a partner for more favors. You have to restructure."

Moving digital operations in house also means building out the digital division at the racing association. "There will be incremental hires in the operations space. We are still trying to figure out the mix to contract out to vendors."