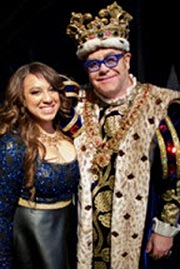 While analysts expect PepsiCo to announce on Feb. 9 that it’s upping its spending by $400 million to $500 million in 2012 -- in large part to provide more support for its core soft drink and snack brands -- the company certainly hasn’t stinted on spending for its beverages’ Super Bowl XLVI presence.

PepsiCo has released details about the components of its Bowl efforts, including sneak previews of new, celebrity-studded TV spots, plus social media initiatives and a long list of Bowl tie-in events.

The “medieval rock fantasy” spot --  produced by TBWA/Chiat Day and directed by Noam Murro -- ends with a (not yet revealed) twist and the tagline: “Where There’s Pepsi, There’s Music.”

Intended positioning: Pepsi is the brand for people “not afraid to take a chance, raise their voices and give it their all.” Also: Pepsi’s taste “is worth challenging a king for.” 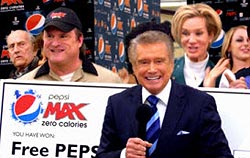 PepsiCo's second Bowl ad, a 30-second spot for Pepsi MAX (the official soft drink of the NFL), features Regis Philbin in his first television project since leaving "Live! With Regis and Kelly."

The spot shows a Coke Zero deliveryman trying to buy a bottle of Pepsi MAX in a supermarket discreetly, only to be unexpectedly picked as the grand-prize winner of “Pepsi MAX for Life.” Philbin appears as an "on- the-spot reporter” capturing the hapless, soon-to-be-famous deliveryman’s reactions. Heightening the competitive jab, the spot is backed by a recording of the Hank Williams classic “Your Cheatin’ Heart” by Sugarland’s Jennifer Nettles.

Pepsi fans who "Shazam" the “King’s Court” spot during the game will be able to view Amaro's “Respect” music video. There will also be an NFL-themed version of Pepsi Sound Off, the brand-led social TV platform that Pepsi launched during “The X Factor” to engage consumers in a real-time “viewing party” with celebrity hosts, plus a branded, Super Bowl-themed Pandora station offering fans Pepsi-curated music/programming before, during and after the game. Finally, through the social network Get Glue, fans will be able to check in and unlock exclusive content and free Pepsi.

In addition, Pepsi and Pepsi MAX will host a slew of Super Bowl activities in Indianapolis between Jan. 27 and Feb. 5, including:

In addition to all of the above, Pepsi MAX is part of Papa John’s “coin toss” promotion, in which members of the pizza chain’s rewards program will all win a free pizza and bottle of Pepsi MAX if their dominant online votes correctly predict which way the coin toss turns out on game day.