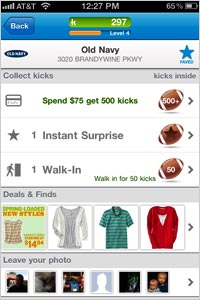 Shopping apps lit up retail outlets everywhere this past holiday season, and many merchants saw red rather than green. According to conventional wisdom, armies of super- smart smartphone-enabled aisle browsers were scoping out products, looking up specs and rival pricing on their apps, and buying elsewhere.

The industry has dubbed the effect, whether real or imagined, “showrooming,” and mobile marketers are now quick to point out that they can be the cure  -- not the cause -- of what ails retailers.

Shopping rewards and promotion company shopkick announced today that its app was responsible for driving $110 million in in-store revenue for over a dozen partners in retail and entertainment in the last year. The shopkick app can be used both in- and out-of-store to locate deals and collect reward points for scanning select items on partners’ shelves.

Claiming 3 million active users of the smartphone app, shopkick says its goal has been to drive foot traffic into stores -- not poach existing customers. CEO Cyriac Roeding sais in a company statement that “the demise of retail would have some seriously bad effects on the country’s economy” and that shopkick is designed to help enhance the brick-and-mortar experience.

Counting Macy’s, Target, Best Buy, Old Navy and American Eagle among its partners, the company says it sees 150 million monthly interactions. When the shopper comes into a partner store with the app active, its presence is detected and the consumer is rewarded with “kickbucks” points that can be applied to gift cards or even charities. In December, shopkick detected and rewarded 5 million walk-ins --  a doubling of activity in just four months.

Shopkick was launched in August 2010 with a high-profile investment from Kleiner Perkins’ iFund. Last week the company announced that it had passed the 3 million active-user milestone and that users had viewed over 1 billion deals. Its users have scanned over 10 million products, according to the company.

“Showrooming” has become a more public concern of retailers after some suffered a disappointing sales season this holiday season. Target in particular has been recruiting suppliers to create products that set its brick-and-mortar experience apart from online retailers. Amazon attracted the ire of retailers last holiday when it offered its app users up to $5 in discounts if they purchased from the online seller an item the consumer had recently looked up in a physical store.

Some mobile marketers, like shopkick and rival shopping app maker inMarket, would prefer to be seen as partners with retaiers that drive traffic and in-store sales. Today, inMarket -- the makers of the shopping rewards CheckPoints app -- announced it was creating a network of shopping apps that are designed to enrich the in-store shoping experiencer and motivate sales.